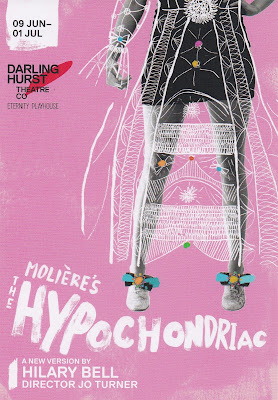 Though mildly amusing, this highly energetic slapstick farce, full literally of toilet sight-gags, does a disservice to the still relevant issue of forced marriage.  Molière was the pseudonym of Jean-Baptiste Poquelin, whose plays were banned because his satiric comedies threatened the powers that be – resulting in his excommunication from the Catholic Church and his incarceration in the debtors’ prison.

Writer Hilary Bell and director Jo Turner have no likelihood of such a fate; yet forced marriage is still “normal” in many places, and in the news especially in the UK as well as here in Australia.  When Argan, the recalcitrant father, complained towards the end that his brother Béralde and his housemaid (sorry, household manager) Toinette were making fun of him – as they were well justified in doing – I suddenly thought “But this play is making fun of Molière” – as it certainly should not.

Molière’s play certainly has singing and dancing, but not of the kind that Bell has used.  His characters, like Pan, Daphne, the Two Zephyrs and the Troupe of Shepherdesses and Shepherds were satirical romantic fantasies, to contrast with the awful anti-romantic Argan and his cynical moneygrubbing second wife Béline whose only concern is to force his daughter Angélique either into marrying for Argan’s personal convenience or being sent to a nunnery so she cannot inherit his property and wealth – for Béline’s personal convenience.

Bell has, I think, combined the original all-singing all-dancing prologue with the later version of Molière’s play (in the 1674 edition) which has instead a romantic forest scene with “agréable” music, fauns and satyrs, with a single shepherdess who sings that all the doctors in the world – despite their “grand mots latin” cannot cure the pain of love.

This has taken the direction of Bell’s version into inane television advertising of “alternative” medicines and concentrated on making fun of Argan’s fixation of believing he is sick because of the massive influence of the alternative medicine industry.  This becomes the “serious intention” of her play, setting aside the matter of how Angélique is treated; whereas for Molière it was his then very modern issue of the denial of love and independence of women which was central to the play – while Argan’s “malade imaginaire” is a sideline device to make a satirical comment on how unfeeling and self-centred such fathers are.

Then there is an awful irony in the behaviour of Béline, who will send her step-daughter Angéline to a nunnery to gain her, Béline’s, financial independence.  Despite the overwhelming slapstickery of this production, Sophie Gregg as Béline managed to make her nasty enough in her description of her husband, when he has collapsed and is apparently dead, to bring us back adequately to Molière’s true intention to expose upper class graft and inhumanity.

It is also true, as Bell has suggested with a more limited cast, that Molière ended with ‘une cérémonie burlesque” with eight enimatic syringes, six apothecaries, twenty-two doctors, eight surgeons, all singing and dancing.  This goes on for seven pages in Molière’s script, written in extremely funny rhyming imitation Latin, with the climax line “Fluxus de sang, et dysenterias!”

But the problem for Bell was that modern medicine has split into the scientific and so-called alternative.  Her adaptation can only deal with the fad for alternative medicine, while for Molière there was no alternative.  In his day it was true, as the Shepherdess sang “Votre plus haut savoir n’est que pure chimère, / Vains et peu sages médecins.”

Unfortunately to satirise alternative medicine today has not enough strength as a theme to support a parallel serious criticism of the treatment of women in our time.  Going for slapstick, however well done by the likes of Darren Gilshenan and Lucia Mastrantone, sacrificed that second theme and only really got to grips with the first in Gabriel Fancourt’s scene as Béralde berating his stupid brother Argan for believing such medical nonsense.

See The Hypochondriac for the clowning and brilliant timing, but don’t expect Molière.  For that, you should have seen Justin Fleming’s translation of Tartuffe into wonderful modern English rhyming couplets in the Bell Shakespeare production at the Sydney Opera House in 2014 ( reviewed on this blog August 13, 2014).