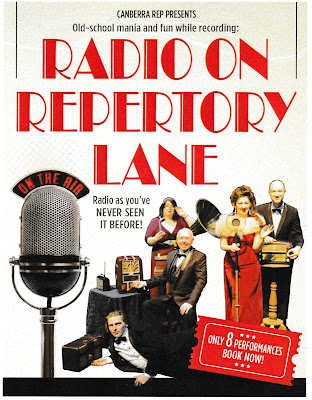 ‘Radio On Repertory Lane’ is a performance of a collection of mostly radio scripts.  A few of the scripts used originated on television and these were, curiously, the most enjoyable ones in the show.

Two episodes of the serial, ‘Flash Gordon’, were presented at the start and end of the show.  They weren’t engaging because we’re not as familiar with the characters as we would be if we’d been following the show avidly week after week as people did back then.

‘Blue Hills’ was introduced by narrator, Michael Cooper, in a tone that implied it wasn’t very good and then some of the cast played it as a send-up, making it hard to see what made the show one of the most famous of its time.

The Agatha Christie Poirot play had a dull script but Tony Turner was fun as Poirot and Ylaria Rogers really captured the style and spirit of a glamorous radio performer before a live audience.

While the radio scripts presented were all from an earlier time, ‘Argument’, ‘The Good Old Days’, ‘Ones’ and ‘The Last Supper’ had all been seen on television in the 1970s.  While entertaining, they were from a different era and didn’t really fit in with the nostalgic radio theme of the show.

Director, Jarrad West had gathered a strong cast of performers who had a lot of fun with the material.  Unfortunately it wasn’t as much fun for the audience.  Played without interval for 90 minutes, it really started to drag after a while.  Maybe including some old radio commercials might have helped as an amusing break from some of the less interesting scripts.

Much of the fun of watching a recreation of a radio performance is in seeing the sound effects being performed.  This aspect should have been given more prominence closer to the audience.  Situated at the back of the set, many of the effects were lost and generally needed better amplification.  The level of background music often swamped them as well.

While the cast gave good vocal performances, the show would have been more successful if a stronger effort had been put into recreating the era and the ambience of radio actors performing before a live audience.  Just performing the scripts into microphones as if the live audience mostly didn’t exist, resulted in a less than memorable show.

Len Power’s reviews are also broadcast on his ‘On Stage’ performing arts radio program on Mondays and Wednesdays from 3.30pm on Artsound FM 92.7.
Posted by Canberra Critics Circle at 3:19 PM