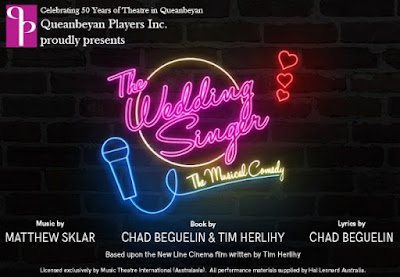 Reviewed by Len Power 22 June 2018
A romantic movie, where a chance meeting leads to a happy ending after lots of trouble along the way, is an appealing formula.  I remember being charmed by the original 1998 movie of ‘The Wedding Singer’ as well as ‘Sleepless In Seattle’, ‘When Harry Met Sally’ and so on.

Co-directors Amy Dunham and Sarah Hull have given us a bright, cheerful production of the stage musical version of ‘The Wedding Singer’, which originally played on Broadway in 2006.

Dave Smith shines as the wedding singer, Robbie, with a strong, likeable characterization and fine singing.  Emily Ridge is totally believable with a warm and endearing performance as Julia and sings very well, too.

Josie Dunham and Tim Stiles sang and acted their roles well and were especially enjoyable with their song ‘Right In Front Of Your Eyes’.  Michael Jordan was fine as Julia’s oafish fiancé, Glen, but needed to put more energy and sharpness into his big song, ‘All About The Green’.  Lauren Nihill was terrific as Grandma.

As George, David Santolin displayed a good sense of comic timing and got the laughs in the right places, but the ‘funny effeminate gay friend’ cliché as written is getting a bit old-fashioned these days.  Emma White performed strongly as ex-girlfriend, Linda, but it was hard to believe that Robbie would have been interested in a character like that.

There was some great work by the large ensemble who sing and dance with infectious enthusiasm.  Choreographer, Emma Nichols, has given the cast good moves that they handle very well.  Costume Design by Lara Jurkiewicz was thoughtfully and colourfully in period and worked for the characters of the performers.

The simply designed sets by Steve Galinec and Anita Davenport worked fine and the colourful lighting design by Jacob Brown added a lot of atmosphere.  Sound levels between band and singers were fine.  Musical director, Jenna Hinton, has done an excellent job with the music, which was well-played.

This is an undemanding, uncomplicated show that has been nicely staged and performed.  The charm of the original story is still there and it’s very entertaining.

Len Power’s reviews are also broadcast on his ‘On Stage’ performing arts radio program on Mondays and Wednesdays from 3.30pm on Artsound FM 92.7.
Posted by Canberra Critics Circle at 5:07 PM