THE BEGINNING OF NATURE 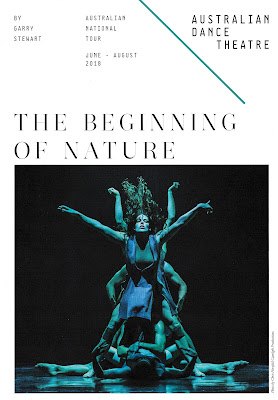 Canberra is lucky to have the Australian premiere of ‘The Beginning of Nature’ as it kicks off its national tour here.  Long in development, it’s a haunting, dream-like work of great beauty.

The director, Garry Stewart, has stated that the work is based on rhythms in nature – rhythms which permeate all aspects of the material universe including day and night, the seasons, the tides and the rhythms of various living animal and human species.  This gives him a large canvas to work on and the director never loses sight of his theme.  The intention of the work is clear and controlled throughout and it’s hugely enjoyable.

Garry Stewart’s choreography makes extraordinary demands on his dancers but the results showed that they were up to the challenge.  This 80 minute non-stop work is breath-taking in its energy and danced superbly by the cast of nine dancers.  Individually and as a group they enact a primal story of growth, mystery, change, savagery and great beauty. 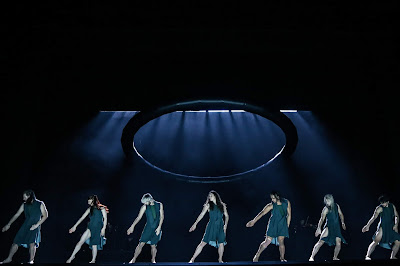 As well as the fine dancing, the music composed by Brendan Woithe and played with great sensitivity by the Zephyr Quartet gave a haunting, majestic quality to the work that suited it very well.  Using the Kaurna language, a once extinct and recently revitalised Indigenous language from the Adelaide Plains region, the beautifully clear voices of Karen Cummings and Heru Pinkasova added another dimension to the musical accompaniment.  Their work was fascinating, obviously demanding and the result added a unique and pleasing sound to the overall theme of the work.

The intricate lighting design by Damien Cooper was almost an extra character in the show.  His work was a great achievement and added so much to the overall look of the production. 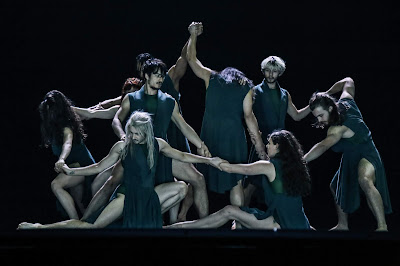 Bringing all the elements of this show together, Garry Stewart has produced a dramatic, timeless, visually stunning and ultimately memorable work that deserves to be widely seen.

Posted by Canberra Critics Circle at 9:38 AM