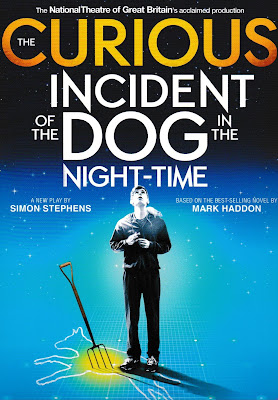 The Curious Incident of the Dog in the Night-Time adapted by Simon Stephens, based on the novel by Mark Haddon.  National Theatre of Great Britain at Canberra Theatre Centre, June 27 – July 1, 2018.

If I describe this highly energised show as “children’s theatre for adults” I may upset most of the very large and equally highly appreciative audience on opening night.  I might perhaps ameliorate their response a little if I called the show “adult theatre-in-education”.

I would probably make things worse for myself if I objected to the gratingly commercialised approach to the publicity, including the business of selling “official merchandise” derived from telling an ultimately heart-warming story of a child savant who as an impossible child splits his parents apart but equally impossibly brings them back to working together on his behalf.  Here’s what you can buy in the foyer: 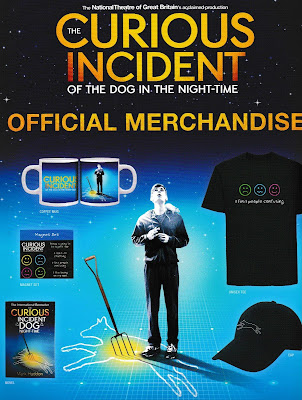 But let me explain.  The drama is plot-centred, based upon setting up anticipation, points of potential achievement, episodes of likely disaster, climaxing in a major success and leaving us with a grand sense of hope for the future. This is the story of Christopher Boone, who can only tell the literal truth, succeeds in discovering who killed his neighbour’s dog, and scores 100% in a matriculation-level advanced maths test and expects to become a scientist – in other words, essentially a children’s story.

Joshua Jenkins, on stage throughout each hour-long act – and even after curtain call to demonstrate the algebraic equation which describes Pythagoras’ square on the hypotenuse theorem – maintains an exhausting pace in physical movement, let alone in the abrupt changes in Christopher’s responses to a world which overloads his senses.  He does an admirable job, as indeed do the whole cast, but in truth (like Christopher I can only tell the truth) the plot is the thing, not any complexity of character.

The style, appropriate to the task, presents us with a quite amazing picture book: we want to turn the pages.  We feel for Christopher and his Mum (Emma Beattie) and Dad (Stuart Laing), and even for the dead dog with the garden fork stuck in it.  We want to cheer Christopher on. We laugh and are happy for him when the train leaves Swindon before the policeman can get Christopher off (which would have been to face his father at the police station). We are afraid for his life when he jumps into the underground train track to rescue his pet rat.  We are amazed he manages to navigate the London Tube as chance voices give him incomprehensible clues.  And I was stunned when his mother and her current partner happen entirely by chance upon Christopher in a street presumably not too far from the address he has memorised – from the letters he secretly found in his father’s room, which proved his mother was not dead from a heart attack, as his father had told him, but alive in London.

So the acting is physical and close to cartoon in style – and very well done at that – while the set design is visually, audibly and technically dramatic, including especially Christopher’s putting together, bit by bit throughout the performance, a toy electric train set covering the whole stage.  It lights up and starts the train running as the play ends – highly symbolic of Christopher’s journey.

There is plenty to think about from an adult point of view, even though the design, in technique, is what the best of theatre-in-education teams would do – if they had the money.  A good comparison would be with Australia’s Shake & Stir Company, for example in their stage interpretation of  Emily Bronte’s Wuthering Heights (reviewed on this blog March 9, 2016).

The inability of Christopher’s mother to cope with a son who cannot recognise ordinary emotional clues, let alone respond to them except by extraordinary but purely literal logical comment, and her finding solace in a neighbour’s husband, is sad.  The response of Christopher’s father in violently rejecting his wife, killing the neighbour’s dog, telling his son that his wife has died (including a lengthy fiction about her time in hospital and her death), and hiding her letters addressed to Christopher from London, is an awful indictment of human vindictiveness.  This is an adult tale of the human condition.

Yet, because the core of the play is the plot and the characters cannot be fully developed, I found it hard to believe how Christopher’s mother could return to Swindon so easily – though it was true that she continued to live apart from her husband and, I suppose, kept herself at a distance from married intimacy just enough to support her son’s continuing need for help.  The play did show his father’s attempt to regain his son’s acceptance – this was a symbolic gentle hand-touching – and Christopher’s rejection of the contact.  I haven’t read the novel and at this point I’m therefore only considering Simon Stephens’ play.

There are certainly adult concerns and issues here, but the happy ending as Christopher receives his result – which he accepts without excitement since he had no doubts about his having completed the exam perfectly – leaves me unsatisfied.  His teacher (Julie Hale), a great example of compassionate professionalism, is overcome by Christopher’s success, as is his mother, and even his father sincerely tells Christopher how proud he is.  But the play fails the adult education question I have: what chance does this extreme Asperger Syndrome character really have of coping when he is frantic under the normal bombardment of noise and movement which is part of other peoples’ ordinary lives; when he is obsessive to the extreme that his mother has to clean his toilet before he can use it after any stranger; and when he quickly turns to aggressive acts like hitting and even trying to stab someone – admittedly his mother’s London manfriend who is clearly obnoxious.

This play doesn’t offer any hope to us adults, except for the everlasting patience of the teacher – who, of course, even so, must remain at a professional distance and refuse Christopher’s request to live with her in her house.

So, I conclude that this production of The Curious Incident of the Dog in Night-Time is an interesting example of theatre-in-education which raises questions for adult consideration – but leaves us with no easy answers or even suggestions.  That’s why I find the promotion of the production – done in much the same format as for the recent royal wedding – is superficial commercialism, which I find grating, when the issues of how we can improve the lives of people born with such differences as Asperger’s Syndrome are deeply difficult, and require great respect from the rest of us. 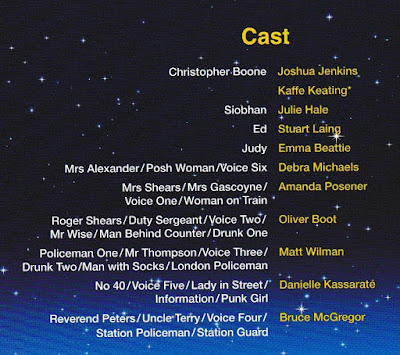 Posted by Canberra Critics Circle at 10:22 AM