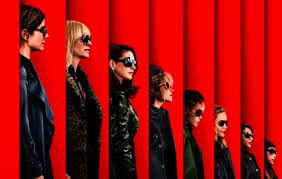 Ever since Clooney and Pitt stepped up for a rat pack romp in Vegas it’s been clear that all you need to do at an Ocean’s movie is sit back and relax and let it wash over you. There’s nothing deep and meaningful, it’s just a fun bubble.

The panache that director Steven Soderbergh brings to the Ocean’s franchise seems to me to hark back to the good old days when Hollywood was full of fizz and sparkle, and that was enough to draw the crowds in. This is a filmmaker who makes smart and thoughtful movies, like Traffic and Che parts 1 and 2 for goodness sake, but he also likes to have his time out. The Ocean’s series is drunk on its dizzying sleight-of-hand and reflects our fantasies back to us.

No way can we say that we don’t know what to expect from Ocean’s Eight, except that the significant difference, no secret, is the team joining forces for one big, bad heist is 100 percent female. Footnote: exploits are no longer in Soderbergh’s hands either.

Not a token male in sight? Well, there was, but Claude Becker (Richard Armitage) is in a world of trouble now that Debbie Ocean, Danny’s kid sister played with steely resolve by Sandra Bullock, is out of the prison cell he consigned her to by dobbing her in to save his skin.

The girls have their sights on $150 million worth of necklace—diamonds and white gold—not a panther-like single stunner, but a Cartier necklace fit for a maharajah. Diamonds were once a girl’s best friend – just ask Marilyn Monroe and Jane Russell – and they still are, but the context is different. While each blonde and brunette bombshell in Howard Hawks’ effervescent Gentlemen Prefer Blondes was after a husband, the motivation here is getting back at Claude, the jerk. It’s a slick touch too that the necklace actually once belonged to a man, an Indian prince.

Debbie has had more than five long years in prison to stew and to refine a plan for a major heist. The plan is to lift a whopping diamond necklace from the neck of celebrity actress Daphne Kluger (Anne Hathaway) at the Met Gala, of all places. 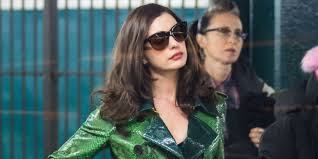 It evolves as a minutely detailed, baroque plot indeed, as Debbie and her bestie, Lou (Cate Blanchett, looking sharp in pant suits), and the rest of the team bring their individual skills to bear on its execution.

Rihanna’s rasta hacker and Awkwafina’s street grifter make their mark but among all the great talent. However, it’s Anne Hathaway who is able to make the most of her role as the celebrity-hungry model, on whose neck the jewellery is to hang and from which it is to be taken.

Piece by piece, the plan falls into place. Debbie's gang operate like clockwork until the heist attracts another participant in a surprise turn of events. The follow-on might well be the best part of the movie.

A bit more fizz and bounce wouldn’t have gone astray, overall. A dramatic near-miss or a slip-up or two would have helped, but director and co-writer Gary Ross and team let these opportunities pass by. On with the show!

In Ocean's Eight, the sheer scale of the loot could pose a problem but the gang shows how diamonds today can still, with a little know how and a lot of teamwork, be any girl’s best friend.