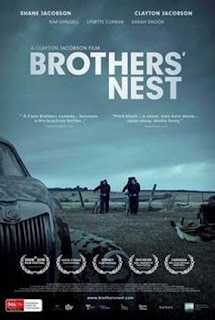 A couple of chumps, their evil plan and a long ‘to do’ list with little imagination for backup are all the ingredients necessary for a crime to go wrong.

It's the substance of this new film from the Jacobson brothers, Shane and Clayton, who won our hearts twelve years ago with Kenny, ‘the toilet guy’. Brothers’ Nest makes a 180-degree turn away from those surprisingly entertaining portaloo jokes to bleak  black comedy. This is a genre that is building momentum as we speak.

It’s the simple plan that is the most seductive and once carried out the perpetrators just cannot shake themselves free.

We love to laugh from on high at the mess that mere mortals make—from the uncommonly lucky chump in Fargo on TV, to Norway's gang of crooks in Headhunters. Once they’re sucked in, like the backwoods folk in Sam Raimi’s thriller, A Simple Plan, they just can’t wriggle free.

But with a difference here. Brothers’ Nest has more ‘family stuff’, with its two middle aged siblings who seem more motivated more by grievance than by cold-hearted greed. It takes things into other territory.

The film opens on the two large men cycling through peaceful  countryside at dawn. That's a bit strange. Terry (Shane) and his brother Jeff (Clayton, who also directs) are more on the big and bearish side than lean and light, and each man carries a heavy dark backpack.

When they reach their destination, the homestead where they grew up, the place is empty, as expected. Their mother (Lynette Curran) is in hospital having treatment for terminal cancer, and their stepfather (Kim Gyngell) is out and not due back till later. There is time enough to set up for his return.

The intended victim, their stepfather, Rodger, may have spent too much time on his old radio collection than with them when they were young, but he is the beneficiary of their mother’s will. She doesn’t have much time left, and nor do the brothers, to work their way through the lengthy checklist.

The men kit up in orange suits and bumbags, with balaclavas at the ready. On hands and knees, Jeff does a spot of hoovering. It’s not clear why, but is likely a sign of his obsessive, task-oriented character.

Jeff also has his work cut out wrangling Terry, because ‘Tezza’ is a hopeless liar and hasn’t the least idea about how to avoid leaving clues. Why can't he use the toilet or smoke his cigarette to relieve a bit of stress? 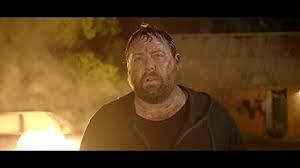 Just when it seems this murder cannot be managed, it is, almost by accident. Then worse still happens.

As Terry and Jeff duke it out among the old car wrecks and the mildly curious cattle, there is a touch of absurdity, and not a little realism, to this tale of family dysfunction.

It also looks great. Cinematography by Peter Falk, and the soundtrack with original compositions by Richard Pleasance make a great contribution to the strong atmosphere and general polish throughout.

Black comedy genre has become jet black since the Coen brothers, but Scandinavian countries have perfected it, and New Zealand does well at it too.

Out there in Australia’s back of beyond there can’t be any shortage of good warped stories left to tell.