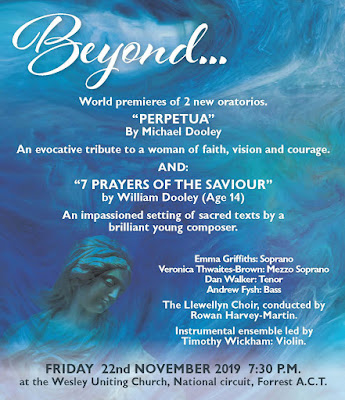 Llewellyn Choir’s latest concert featured three works by two members of Canberra’s musical Dooley family.  “7 Prayers of the Saviour” was an oratorio by up and coming fourteen year old William Dooley and there were two works by his father, Michael Dooley, “The Land That Is Very Far Off” and an oratorio, “Perpetua”.  Both oratorios were world premieres.

Rowan Harvey-Martin then conducted William Dooley’s oratorio, “7 Prayers of the Saviour” with the Llewellyn Choir, four vocal soloists and the ensemble.  This ambitious work with recognizable influences from composers of the past commenced with rather tentative singing by the choir.

It was most successful in the simpler vocal lines of “Prayer For Lazarus” and “Thy Will Be Done”, sung very well by bass, Andrew Fysh.

An opportunity to hear his work fully produced, it would have been of enormous help for this young composer on his journey to finding his own distinctive style in the years to come.

After interval, the choir presented Michael Dooley’s new oratorio, “Perpetua”.  The story of Perpetua is from the oldest existing document known to be written by a Christian woman, “The Passion Of Saints Perpetua and Felicity”.  It was a good choice for the oratorio as it has a strong and emotionally gripping storyline.  It tells of an educated woman who converted to Christianity and was ultimately martyred for her beliefs in the year 202 AD.

Michael Dooley produced a work of great beauty throughout.  From the haunting and atmospheric setting of the opening, “Soli Deo Gloria”, the work progressed from one highlight to another.  His underscoring of the recitatives was especially notable.

The beautiful, clear soprano of soloist, Emma Griffiths, who sang the role of Perpetua, was most effective in her recitatives and soared above the choir in the “Agnus Dei”.  Her singing of “Confitibor Tibi” towards the end was heart-felt and memorable.

Mezzo soprano, Veronica Thwaites-Brown, was a standout with her singing of the very moving “Felicity” lullaby.  Tenor, Dan Walker, was in fine voice with his singing of “Saturus Vision” and bass, Andrew Fysh, sang an excellent Narrator 2.  He gave an especially well-judged level of drama to his singing in “Day Of Victory”.

The choir sang the work with great confidence and clarity.  Rowan Harvey-Martin conducted the whole work extremely well.  The standing ovation at the end of the performance was well-deserved.