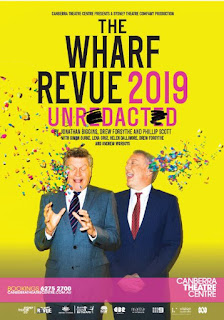 This, we are told, is the penultimate Wharf Revue from Sydney Theatre Company.  I’m thinking of a Get-Up campaign to fund the show forever.

This year, being unredacted, many of the items passed over the edge of satire into the dark energy of true political criticism.  Quoting Aung Sun Suu Kyi speeches back to herself as the past-winner of the Nobel Peace Prize, to the tune of ‘Don’t Cry For Me [Argentina]’ was truly awful as she justifies the killing and ethnic cleansing of Rohingas in the name of democracy – that is the Buddhist majority.  The Buddhists are ‘tough’ she sings.

Equally stinging is the exposé of the role played in the last election by Clive Palmer, who spent $80 million on his fake party, with the purpose not of gaining even one Senate seat, but getting Scott Morrison elected Prime Minister.  It was not the God you pray to who gave you the position, Palmer tells Morrison, but me – and I now have you ‘in my back pocket’.  Meaning, of course, Palmer expects his quid pro quo – government support for his coal mining venture in the Gallilee Basin in Queensland.

Damning too, was the video campaign by Border Force to dissuade potential refugees.  Using real images of Minister Peter Dutton which turn into grotesque horror faces, the theme of the campaign is “We have to live with this – so don’t come to Australia.”  I could not reproduce the video here, but gruesome is the word.

Then on the other side, we see Bob Hawke, now in Heaven in the company of God and Jesus Christ – and Jews, and Moslems, and Buddhists like the non-speaking pianist, Andrew Worboys.  “I know that song,” says Bob  “Thanks for the memories”.  And he sings a moving memorial to his great legacy of achievements as Prime Minister for eight years in the 1980s.  John Howard, he admits, had a longer run (11 years), but ‘I’m the one people remember’ – as was obvious when he died last May.

These are only four of the 17 items in the 90 minute show – too many to go into detail.  I liked “Sisters” – Labor’s shadow minister for foreign affairs Senator Penny Wong and independent Senator Jacqui Lambie – showing their differences in personality and political approach, yet still sisters in our male-dominated political world.


And everyone was in fits of laughter at Drew Forsythe’s long-legged short-skirted red-wigged presentation as One Nation’s Pauline Hanson.  I haven't a photo, but here's one of Helen Dallimore as the dreadful Donald Trump (with the real one on the big screen behind).

If it is true that we will have only one more Wharf Revue, in 2020, offered by Sydney Theatre Company, then there should be a serious attempt to keep this essential annual review of politics going.  It’s a ritual  our democracy needs to ‘keep the bastards honest’ and to save our sanity – and our sense of humour.

May Jonathan Biggins, Drew Forsythe and Phillip Scott find themselves in heaven with Bob Hawke, and with Simon Burke and Andrew Worboys – but not yet, please.

On the way to heaven they should keep the team together.  Amanda Bishop didn’t appear this time.  I guess she was too busy being Dogberry in Much Ado About Nothing for Bell Shakespeare – an appropriate role for her comic talents.  Lena Cruz and Helen Dallimore were so good, though, that it would be hard to let either of them go.

Especially, too, keep costumier Scott Fisher and wigger Margaret Aston who added enormously to the comedy; while Matt Cox’s lighting of Charles Davis' design, and particularly Ben Lightowlers’ top-quality video, put this year’s show a step above even last year’s.

Thanks for the memories, and maybe next year the theme song will be Stairway to Heaven.

Posted by Canberra Critics Circle at 10:55 AM