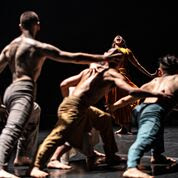 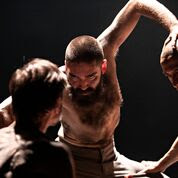 Artistic director and choreographer Akram Khan’s Outwitting the Devil issues a dire and terrifying warning to a contemporary world. Inspired by Tablet V of the great Sumerian Epic of Gilgamesh, Khan’s extraordinary dance work centres on Gilgamesh’s amazement at the abundance and diversity of the great Cedar Forest and its shameful destruction and killing of the forest’s guardian Humbaba by his friend, the wild man Enkidu. This wilful acnt of violent destruction of the environment angers the Gods who take revenge by causing the death of Enkidu.
Khan’s re-imagined interpretation of the Gilgamesh myth is a masterpiece of cinematic grandeur and epic stature. Light from the spots above casts an eerie, solemn wash of mystery upon the clay tablets strewn across the stage. At the rear of the stage stands a large table, an object of sacrifice or death. Integral to the myth, it also references Susan Dorothea White’s reinterpretation of Leonardo da Vinci’s Last Supper, depicted in her work as a meeting of different women of diverse cultures and thus dispelling the notion of a patriarchy as depicted by Da Vinci. Khan’s interpretation includes the central figure of the female deity Ishtar, manipulating the action and overpowering Gilgamesh. Still figures, including the old and dying Gilgamesh, caught in the hazy light, present a silent tableau as a mysterious foreboding to the dance.
Khan’s choreography is volcanic, from the stillness of expectation to the forceful eruption of violence and terror as a resounding sound of shattering announces destruction and death. The forest collapses around the powerless Gilgamesh as Enkidu snaps the neck of the captive Humbaba. It is an image of spine chilling horror.  Enkidu’s act of environmental destruction augurs the retribution of the Gods with the inevitable death of Enkidu and the abandonment of Gilgamesh’s dream to build the city of Urku as a monument to himself. Through the haze we see the smoke engulf the city as Gilgamesh departs to his final resting place upon the tomb.
The vast traverse of the Gilgamesh myth is told through the breathtaking dance of a company, so imbibed with Khan’s dynamic choreographic vibrancy, that an audience is held utterly spellbound by the elasticity and vitality of six superbly athletic, and choreographically expressive artists. Whether the six dancers are performing a solo moment of the myth or offering a brilliantly danced ensemble expression of the saga, each chapter of the dance offers an overwhelming impression of the power of the narrative and the drama of the theme. Their elasticity and muscular expressiveness and riveting dance vocabulary creates an unforgettable telling of a titanic story of the human condition. The dancers are the spirits of an ancient myth with a warning for our time and all time in Akram Khan's brilliant and unforgettable work.