Poetry rolls off the tongue like the swirling waters of a fast flowing river. Images fly through the air, stirring the heart and firing the mind. The poetry of hip hop artist Omar Musa tumbles through our consciousness,sometimes spitting satire; sometimes sighing sweet sentiment , always carrying his audience to a new awareness. Musa is the philosopher poet of his tribe. He is a prophet of his generation.


A shaft of white light beams down on the imposing figure. He is in a boat with his childhood hero, Mohammed Ali. Together they glide through the memories of Musa’s life steered by the spirit and the strength of the ghostly legend at his side. You can take the boy out of his hometown Queanbeyan but you can’t take Queanbeyan out of the boy. Words become portraits on the canvas of his life, luminescent in the language of his experience, as he exhorts his audience to “take out your eyes and see with your heart’. Hearts and minds echo through the rhythms of his poetic landscape as we journey into the deepest chasm of his personal reminiscences. There is power in his driving verse. There is pain in his rhyme. There is love in his alliteration, as he “dances in the cemetery of the world.”


The portraits flood forth as the incessant heartbeat in the hip hop metre and rhyme leads us to that private world of a young Muslim Eurasian brown skinned boy growing up in a country town in New South Wales. This Magi of the spoken word reveals to his idol the pain, the confusion, the love and the longing of a boy between two worlds. Musa’s poetry is a monument to language and experience.


There is skallywagging along the banks of the Queanbeyan river with childhood friend Danny, who goes off the rails and lands in gaol on a path to an early grave. There is the cruel and ignorant schoolyard bully who mocks the colour of his skin “as brown as shit”. There is Jamila, who loved red Chinese lanterns but turned off the light on their love and taught him the cruelty of unrequited love. 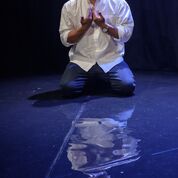 There is his father from Borneo with eyes of crimson turned in fervent prayer towards his God, except on one day when he taught his son to cook. There is his mother, who called him “my beautiful boy” and taught him to question everything.


And there is Ali, a black Muslim Afro American with the cheeky grin and the quick quip to cut through the crap and tell the world “I am the greatest.” The poetry of love and respect, admiration and devotion spin the fabric of his hero’s gift to the boy from Queanbeyan and together before Danny and the boxer’s grave they dance in the cemetery of the world and sing the affirmation of their pride.


He is joined by Poppy Zanderigo with the honeyed voice and soulful sound in “I can do anything” and the audience echoes the chant with the fervent power of Musa’s hip hop verse. Together they dispel the bully, the racist rant, the oppressive obsession and the bigoted attack of Mark Latham. Together they celebrate the spirit of Ali that lives on in Musa’s poetry and compassion. 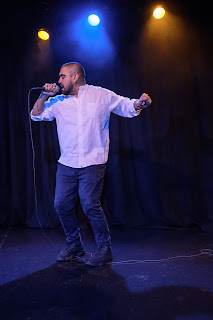 Director Anthea Williams has guided Musa through the theatre of experience with a certain eye for structure and intention. Her direction is beautifully balanced guiding Musa’s charismatic performance with astute intellect and theatrical flair. Musa’s admission that this could be the last performance of Since Ali Died´ stirs a disappointed response. Anyone fortunate enough to see this show and be a part of the standing ovation have witnessed one of the most important artists in Australia today. And that is not said lightly. Since Ali Died  may be put to rest but the work of this significant philosopher poet has much more life to live and love to give.
Posted by Canberra Critics Circle at 9:57 PM