MY HOME AT THE INTERSECTION OZASIA FESTIVAL 2019


My Home At The Intersection.

A striking feature of the OzAsia Festival in Adelaide is the diversity of human experience expressed in the variety of performances by Asian and Australian artists. Four performances that I saw during my visit to this unique festival were personal explorations of the profound impact of events and experiences in their homeland.


Cuckoo recounts the reason why South Korean actor left Seoul at the time of the great Asian financial crisis and the consequences for his countrymen and women. Surpassing The Beeline, written and directed by Abishek Thapar introduces audiences to the stories of expats living in Amsterdam and Adelaide and the connection with their homland through the food of their culture. Since Ali Died describes what it was like for Eurasian Muslim Omar Musa growing up in the Australian country town of Queanbeyan. Each story arouses empathy and understanding. My Home At The Intersection is another moving tale of displacement and the impact of political events on the people of Northern India.


Thapar greets his audience in the foyer of the Adelaide Festival Centre’s Dunstan Playhouse. In his hand he gently holds a lemon pickle jar, a final reminder of his grandfather. He carefully cuts the remnants of the pickle discovered in 1992 when the family were forced to flee their country for Europe twenty seven years before. 50 fingers dab lightly into the lemon pickle to savour the bitter sweet taste at the back of the throat.  Thapar leads us through the corridors below the Dunstan Playhouse to a Rehearsal Room strewn with wheat seeds, Cushions are on the floor and a row of chairs behind facing a video screen. Music plays in the background and Thapar crouches amongst the seeds on the floor. 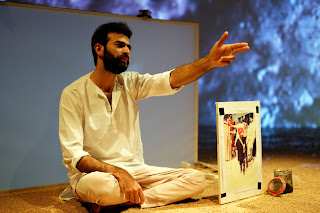 What follows is a simple, graphic and moving account of the impact of the anti-Sikh riots of 1984 that drove Thapar and his family from Punjab under the threat of persecution and death after the assassination of Prime Minister Indira Ghandi by her Sikh bodyguards. Using models of the Golden Temple and signs to indicate the opposing forces and military operations, Thapar traces his life from a happy young child who won an award for his Superhero costume to his family’s flight to the Netherlands and eventual return with memorabilia to re-enact a home life on video in remembrance of his family’s homeland. Even then, his family was unable to re-enact an aspect of life on the soil of their home, which had been razed to the ground. 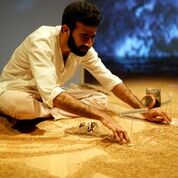 Like so many who have had to flee their homeland and seek security in a foreign land, Thapar searches for identity, sifting through memories of the past, the horrors of the violent quest for a Khalistan State, and a longing to remain connected to his homeland through his grandfather’s lemon pickle jar. This is a personal voyage of enormous pathos. Seated on the floor and tracing the streets and places in the wheat seeds, Thapar tells his story with earnest, gentle explanation. At times, the emotions overwhelm, causing him to pause before continuing and drawing us into his story.


We move out to the corridor where our shoes have been placed before entering the performance, and we move back to the foyer and out into the daylight, secure in the knowledge of who we are and the place we call home. My Life At The Intersection and Thapar’s other show at the festival, Surpassing The Beeline evoke a salutary wave of empathy, gently, clearly and persuasively. I walk back into the streets of Adelaide and I think of Manus and Nauru and the many displaced by violence, by politics and by oppression and who are denied a place that they can call home.
Posted by Canberra Critics Circle at 11:16 PM