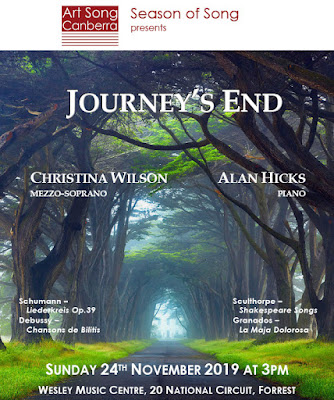 ‘Journey’s End’ was a well-chosen title for the final Art Song Canberra concert for 2019.  A well-chosen romantic program of works by Duparc, Schumann, Debussy, Granados and Sculthorpe, it offered a sense of life, love and destiny that would have resonated differently for everyone in the audience.

Performing to a near-capacity Art Song Canberra audience, husband and wife duo, Christina Wilson, mezzo-soprano, and Alan Hicks, piano, have a deservedly strong following in Canberra.  They have also had busy international careers and teach at the ANU and the Sydney Conservatorium of Music.

The program commenced with a striking performance of ‘L’Invitation au Voyage’ by Henri Duparc.  A romantic and colourful work, it was sung with great appeal by Christina Wilson and Alan Hicks’ playing of the complex accompaniment was excellent.

This was followed by all 12 songs of Robert Schumann’s song cycle, ‘Liederkreis Op. 39’ which was composed in 1840.  These songs were set to the poems of Joseph von Eichendorff, a Prussian writer and poet of the era of Romanticism.  The highly descriptive words give a strong sense of nature and its impact on the human condition and Schumann’s music is sublime.  They were beautifully sung by Christina Wilson, especially the emotional “Intermezzo’, the haunting ‘Moonlit Night’ and ‘In A Castle’ with its disturbing undercurrents.

Moving from haunting and ethereal works to the more passionate works of Enrique Granados, Christina Wilson performed the three songs of ‘La maja dolorosa’ with an impressive emotional restraint that subtly and effectively displayed the passion behind the words.

Four Shakespeare songs set by Peter Sculthorpe were then wistfully sung to complete this fine program.

Christina Wilson is not only a superb singer technically, she also sings with great emotional depth and a clear understanding of the intent of the songs.  Alan Hicks is a brilliant accompanist.  Their performances together are not to be missed.