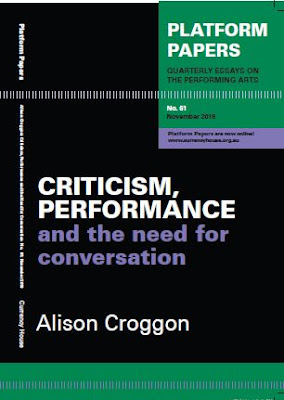 Criticism, Performance, and the Need for Conversation by Alison Croggon.  Platform Paper No 61, Currency House: November 2019.


“Theatre reviewing for the most part… exists in a space somewhere between literature and journalism, with enduring characteristics that include ‘bias in favour of actors and dramatic character, […] suspicion of rules, […] pragmatic reportage and [the] need […] to persuade the reader that the theatre will do him good’”.

After a history of arts criticism in the coffee house tradition – “the seventeenth-century version of Twitter” – Alison quotes Stella Gibbons (the novelist who wrote Cold Comfort Farm, 1932) as a point to begin discussion about the nature and purpose, and the particular place of arts criticism in Australia today.  She notes:

“that British theatre critics were, until as late as the 1990s, entirely male.  Australian theatre criticism, sedulously shaping itself as a colonial reflection of the motherland, inherited almost all of the characteristics and assumptions of British criticism. But there were crucial differences.

“Cultural criticism has never had the same prestige in Australia as it did in Britain or the US. Consequently, some bastions were easier to breach. Katharine Brisbane, notably a woman and arguably the most important Australian theatre critic of the late twentieth century, became national theatre critic for The Australian newspaper in 1967. Later, in the brief but extraordinary efflorescence of creativity that was theatre blogging culture in the early 2000s, it took less than four years for blog reviews to become accepted as mainstream.”

Platform Paper No 61 is especially important for us, as bloggers, moving unpaid online as we did in 2010, to see what we do in the broader context now, where “In Australia, only newspapers that value the aura of prestige that comes with the arts—such as News Ltd’s The Australian, or Schwartz Media’s Saturday Paper—keep a strong arts section. Elsewhere, longform arts journalism has all but vanished from the mainstream press.”

Croggon herself blogged from 2004 until 2012, “the first [theatre critic blog] in Australia, and one of the first in the world.”

Theatre Notes wasn’t funded and was never
dependent on institutional support; that was a very
conscious decision on my part. What I valued above
all in that writerly space was my autonomy, and I
was very willing to pay for my freedom.


She describes how “Theatre Notes and the other blogs that sprang up in the following years began a conversation that invited difference, that spurred interest, that argued fiercely and (at its best) without rancour about ideas, aesthetics and politics.  And gradually, instead of being the only public truth available, the corporate authority that trumps all others, the conservative mainstream pundit became only one voice among many” and then quotes Robert Brustein: [trying] to find out what these artists, if they were artists, were trying to do, and then to see whether they did that successfully. But at least to try and find out what the intention was before I rejected it, to explain her approach to writing theatre criticism.

“I was a very particular kind of theatre critic,” she writes.  “I saw (and see) myself as an advocate and, in some ways, a custodian with a shared responsibility for the wider culture.  Moreover, I was the kind of critic that simply couldn’t exist in Australian newspapers, then or now…..Theatre Notes became part of an online conversation that straddled conventional divisions between professional and amateur; critic, artist and audience; academic and popular; local and global.”

In her detailed examination of the value of this cultural change, once again especially relevant to the way we work in the Canberra Critics’ Circle, she emphasises how blogs “began a conversation that invited difference, that spurred interest, that argued fiercely and (at its best) without rancour about ideas, aesthetics and politics.”

I noted in this past week, that we published five reviews of the innovative work Matrix, by the combined Expressions Dance Company (Queensland) and Beijingdance/LDTX in the small regional theatre The Q, Queanbeyan Performing Arts Centre.  With the consolidation of commercial media outlets taking us down to News Ltd and Nine, so that in many parts of Australia people have only one source of comment, or two at best, our local offering as a cross-arts critics’ circle is a pleasing anomaly.

As Alison Croggon puts it: “Criticism as a whole is best recognised as a polyphony, rather than a monologue. If there is diversity in making and experiencing art, then the health of cultural response can be measured by the availability of a social diversity of response.”

Her conclusions, though, are not very encouraging as she tells us the story from 1. Some perspective through 2. Digital disruption and 3. The Age of SEO (Search Engine Optimisation) to 4. Why does this matter?  Cultural criticism and cultural memory.

“But criticism isn’t an optional extra,” Croggon insists. “Without it, our culture becomes a series of atomised acts that flicker into the privatised present and are then forgotten. If it is to survive in any but its most denatured forms, Australian cultural bodies now need to take this long-debated crisis in theatre criticism seriously, and to consider seriously how to support it.”