WAITING IN THE WINGS 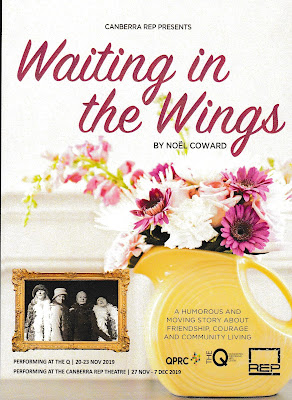 Noel Coward’s 1960 play, “Waiting In The Wings” is from the period when his work had fallen out of favour and was considered by the critics to be “old-fashioned”.  Enthusiastically received by the public at its London opening, the play received poor reviews from the critics and was ultimately not a financial success.  Four decades later, the play had a very successful season in the USA on Broadway.

Set in “The Wings”, a charitable retirement home for actresses, the inhabitants are concerned about the imminent arrival of new resident, Lotta Bainbridge, who has had a famously long-running feud with another resident, May Davenport.

The story line of the play is not as compelling as it sounds as the feud between the actresses is easily resolved and the secondary story lines lack drama as well.  The enjoyment of this play comes from observing the interplay between the colourful characters, many of whom are ageing actresses.

Director, Stephen Pike, has gathered together a dream cast of Canberra’s finest, most experienced actresses of a certain age and they all rise to the occasion beautifully.  In the major roles, Ros Engledow as Lotta Bainbridge and Liz Bradley as May Davenport make every moment count with their nicely drawn characters and excellent sense of timing.

Joan White is amusing and touching in her role as Sarita Myrtle, a woman losing touch with reality and Alice Ferguson is hysterically funny as the attention-seeking nervous wreck, Estelle Craven.  Liz St Clair Long has a field day with her strong performance full of attitude as the feisty Irish actress, Dierdre O’Malley.

Adele Lewin is delightful as the sharp-tongued and cynical Cora Clarke and Penny Hunt brings great energy and musical fun to her character of Maude Melrose.  Micki Beckett as Almina Clare and Liz de Toth as Bonita Belgrave also give nicely-judged performances in their less prominent roles.

The other cast members who play staff members and visitors to the home, Peter Holland, Nikki-Lynne Hunter, Dick Goldberg, Rina Onorato, Antonia Kitzel and Iain Murray, all get their moments to shine.

Stephen Pike’s direction flows smoothly at a deliberate pace with plenty of business devised for the characters to give the play the energy it needs.  Andrew Kay’s vast set design achieves the right atmosphere and has been nicely dressed.  Anna Senior has even excelled herself with her colourful and stylish costume designs.

In the face of criticism late in his career, Noel Coward argued that a play’s primary purpose was to entertain and he made no attempt to modernise his work.  Audiences need to approach “Waiting In The Wings” with that in mind and you won’t want to miss seeing these terrific performers working at the top of their game.

Posted by Canberra Critics Circle at 11:09 AM