I'm With Her - Darlinghurst Theatre Company 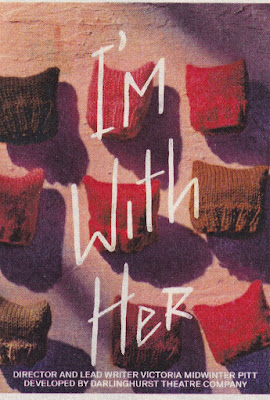 I’m With Her is a quite extraordinary example of RealTheatre (like RealPolitik - a system of politics or principles based on practical rather than moral or ideological considerations.)

Of course there are moral issues when so many of these nine real women – so many significant successful women – talk of their experiences of invasion of their person, verbal and physical; of violence in marriage; of their fear of walking home at night.  That’s the most bluntly horrific part of their stories, when we see the figures on a big screen – a woman killed in Australia about every 9 days.

The cleverly written and even often humorous ways the women’s stories are presented and how the themes of their very different lives are linked together is engaging in unexpected ways.  The second hour begins as I fall into a trap for the unwary critic.  One of the cast is in the audience, loudly reviewing the play: in effect telling me what I am going to write about women.  So now I’m in a bind, especially since I happen to be male, white, originally a £10 English Pom, brought here in 1955 under the auspices of the Robert Menzies government and the male culture that still in 1998 could respond to 13 year-old Erin Phillips, after she had played Aussie Rules football from the age of eight, as follows (“My Dad was a champion footballer and he taught us all to play”):

“When I was 13, the next season was a development league.  I said to my coach, ‘Where’s my registration paper?’  He had to spell it out to me – after 13, girls weren’t allowed to play against boys.  The boys had their path laid out for them – all the way through the AFL, if they were good enough.  But for me, the next step was a dead end…You’d never find out how good you were.  No development, nowhere to develop to.”

Time wise, the story goes back to Marion Blackwell, born in 1928.  “I loved growing things….I did well in the school leaving [exam] and after that, I thought Vet Science would be a very useful thing to know.  Nobody in my family had ever been to university but my father thought that sounded sensible so we made an appointment with the dean of the Vet School at Sydney University.  Very important man…I was expecting to find out about the course, what I’d be doing, and where the classes would be.  But I was just ignored.  Just him and Dad having a good chat about the country and the weather you know, the way men go on.

“Finally my father got around to it – we’ve come to enrol young Marion.

“The Dean completely chopped him off.  He just erupted – ‘What?!  A girl in my faculty?!  Over my dead body!’  On and on he went.  When he finally stopped, my father – politely as he could – asked: why not?  Well, he looked at my father, and huffed and puffed for an answer and finally he spluttered out – ‘Well, how would she throw an elephant?’  I just looked at him and I thought – are you an idiot?”

Marion found other ways: “If the front door won’t open, go around the side”; and she did study Science at Sydney University, specialising in plant ecology and physiology.  Upon graduating, she was appointed the Foundation Lecturer in Mycology – “the study of fungi – the basis of everything!”

And Erin Phillips? The AFL launched the professional women’s league in 2017.  “The Adelaide Crows asked me to play.  I was 31.  The age most players retire.  It was 17 years since I’d stopped playing.  My wife Tracy – who was pregnant with our twins – was like, ‘do you even still know how to play?’  I knew.”

Despite breaking her leg, Erin Phillips was named best on the gound.  Her team, Adelaide, won the Premiership.  Text projection: The best footy player in the country made a speech…”When I was born, people felt sorry for my Dad because he didn’t have a son to play footy someday.  So – Dad I know you’re watching, and Mum….”

If you like, this RealTheatre is a kind of documentary, but the fascinating thing is that having actors perform in the roles of the real women turns the reality into what seems to be a fictional drama, with relationships forming between the characters (who in real life are not in actual contact in space or time).  Then weirdly, because it is drama, the underlying truth is revealed, as it would be, say, in a Shakespeare play.

And we all, then, come to understand at a great depth what equality really means.

My thought for the future is that the show needs a much wider dissemination than Eternity Theatre can provide.  Women – and especially men – need to come to that greater understanding across the whole community.  It would take a new development project to make it work on screen as well as this production works on stage in a theatre, but I certainly would like to see it happen.  One suggestion is that the ABC program You Can’t Ask That may provide a model to start off from

And, of course, like this production, it will need to be done entirely by women.  An authentic women’s voice.