The actor Antonio Banderas and director Pedro Almodovar first worked together in the 1980s and helped make each other famous with sexy, taboo-breaking films like Law of Desire, Women on the Verge of a Nervous Breakdown, and Tie Me Up! Tie Me Down! It was the post-Franco era in Spain and time to tear down decades of fascist repression.

Pain and Glory reflects on the central relationships in Salvador’s (Banderas) life – mother, lovers and actor collaborators. It’s a very personal collaboration between the actor and filmmaker, like a confessional from a couple of famous men of the big screen.

We first see Banderas, as successful film director Salvador Mallo, holding a pose while meditating at the bottom of a swimming pool.  The watery world draws memories of his early childhood to the surface, memories of laundry day at the river’s edge with his young mother (played in these scenes by another Almodovian muse, Penelope Cruz).

A gift for directors, fromTarantino to Almodovar, Banderas has had health issues of his own
As he catches up with an old friend, Salvador reveals that he has stopped writing and directing. Her surprise that he, of all people, has become reclusive and inactive, is a clue to the kind of person he was. 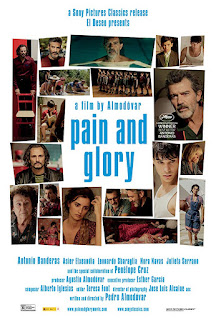 In later flashbacks, while in conversation with his elderly mother, he listens in such a touching way to her complaints that he disappointed her. Later, in a sweet scene between Banderas and Julieta Serrano, who plays Jacinta in her old age, she explains exactly how she wishes to be laid out when she dies.

In conversation with his long lost friend, Salvador recounts his various ailments, a list of enemies within that have beset him. His asthma, headaches, tinnitus and the sciatica that has given him a bad back. It’s a scary anatomical collage of medical imagery, almost as arresting as the opening titles over melting images that turn from solid to liquid before our eyes.

The state Salvador is in is a million miles from the irresistible hunk Banderas played in Almodovar’s early films, or from the swaggering hero he has played in Hollywood.

Another key relationship, not so explicitly referenced, is with the gay lover Salvador had when they were young men, before Federico (Leonardo Sbaraglia) left for Argentina and took a wife. The scenes between them 30 years later at Salvador’s apartment in Madrid, including the prominent kitchen with its bright red cupboards that looks a lot like the director’s own, are lovely to watch too.

Yet another key relationship is the actor Alberto (Asier Etxeandia) from whom Salvador has also been estranged many years. Both Etxeandia and Sbaraglia give terrific performances too.

Handsome, tousle-haired, with a shy twinkle in his eye, Banderas has always been a welcome sight on screen. A gift for directors, from Quentin Tarantino to Almodovar, looking for a swashbuckler with devil-may-care (Desperado) or for a man for women to desire. Yet, here in Pain and Glory the presence we became used to is barely present. Banderas has been chastened by a real-life health issues of his own – a recent heart attack.

These life stories of these two creative collaborators, the film director and his alter ego, wind around each other like a double, double helix. Except that Banderas isn’t gay.

It is like two of them put their heads together to create an intelligent, amusing and moving film with deep meaning for them both. Their energy coalesces around the wonderful performance that won Banderas the best actor award at Cannes earlier this year.

Since I became captivated by Almodovar’s witty, naughty, exuberant early films, he has remained one of my favourite filmmakers. All the while, his distinctive filmmaking - Volver and All About My Mother and Talk to Her among his best - has evolved, developed more depth and matured.

It isn’t surprising to hear in interview that another key relationship in Almodovar’s life has been the cinema, the world in which he says he still lives today. It’s a place of warmth and sensuality, of wit and wisdom, and as we see here, not without regrets.

Pain and Glory is a superior work from Pedro Almodovar with an intensely sensitive performance from Antonio Banderas. Both men may have been the bad boy and seen it all, but we didn’t know about this gentle, reflective side deep within.

First published in print and online by the Canberra Times on 9 November 2019, and also published at Jane's blog