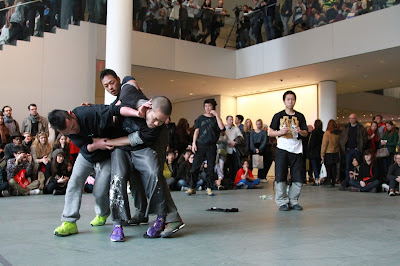 STUCK IN THE NARROWEST PATH.

It occurs to me as I watch Contact Gonzo’s Stuck in the Narrowest Path that the performers must possess a superb sense of control and an instinctive trust that protects them from serious harm as they jostle and shove, slap and pound, leap and collide and continue relentlessly to physically assault each other in a display of playground skylarking. Their physical pummelling and punching, slapping and shoving is unrestrained and the punches to the chest echo through the offices of the Adelaide Festival Centre where the audience stands against the wall as the performers combine martial arts with playgrround rough-housing, to the melodic accompaniment of the Zephyr string quartet.

The audience has been led from the foyer of the Dunstan Playhouse to the very narrow entrance in to the Festival Centre offices where Contact Gonzo are waiting amongst the office cubicles. Vision of a man sliding down a hill plays on the monitors and the Zephyr Quartet plays a classical piece. It begins gradually, building with momentum as the men become embroiled in a contest of strength and wily agility.  Deadpan double takes and sudden impulsive responses heighten suspense and  audiences watch on uncertain at first whether to grimace at the unrestrained physical onslaught or laugh at the comical deadpan slapstick.

An announcement and festival ushers move us into the next room where another artist performs a Butoh style dance in which the human form transforms into a bird. Slow and angular, controlled and mesmerizing the movement becomes a transformative dance. In the next room microphones emit the babbling sound of babies in a surreal disembodied soundscape." Every day is a new day" the voiceover repeats as we move into the next room within the bowels of the Festival Centre. There, connected by hoses and surrounded by domino collapsing boxes the performers repeat their physical dance of aggression. Sticks are strewn across the Green Room floor and are then connected to audience limbs in a balanced sculpture of still human figures before the sticks collapse and we are free to return to the offices for the final display of physical leaping, bouncing, colliding and slapping by all performers in an hilarious display of impulsive clout and response. 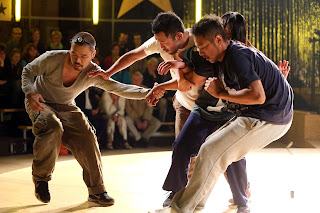 “Just like Year 9s in the schoolyard” the teacher next to me remarks. This is contact on the edge of ominous confrontation, relieved only by the immediate comical reaction. Momentarily dangerously anarchic, the pressure is relieved and anxiety is released in a moment of laughter.

The promenade performance provides a flash of fun and ingenuity. It is street theatre in the behind the stage rooms of the Adelaide Festival Theatre.  It teeters on the precipice of violence, always promising danger but secure in its control. It belongs on the street with the street performers, skateboarders and plankers . It pushes the limits of physical contact and leaves me moving out into the hot Adelaide night, satisfied that I had at least seen Stuck In The Narrowest Path.