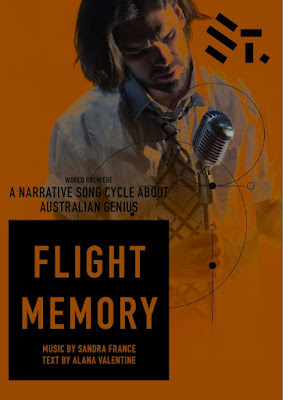 The Street Theatre to 17 November


Most people probably aren’t aware that the Black Box flight recorders that are now mandatory on commercial aircraft around the world were originally an Australian invention by scientist, David Warren.  This important scientific development was dogged by the apathy of Australian Government officials at the time and David Warren never really got the recognition he deserved.

‘Flight Memory’ at The Street is a new production that tells the story of David Warren and the troubled birth of his invention in a narrative song cycle composed by Sandra France with libretto by Alana Valentine.

The work consists of 10 songs with references to Baroque, Classical, Minimalism, Blues, Swing and Hip Hop in their composition.  It’s quite accessible music and it was a pleasure to listen to the expert playing and the multi-layered arrangements by the ensemble.  Sandra France’s piano playing was especially notable as was Tom Fell’s playing on the saxophone.

Librettist, Alana Valentine, has produced words that are recitative in style.  There was linking narrative material between the songs as well as a sprinkle of familiar modern day aircraft on board safety instructions.  Some of this seemed stiff and awkward in delivery.

The songs make strong vocal demands on the singers with the shifting styles of music and the non-conventional lyrics.  The singers, Liam Budge, Michelle Nicolle and Leisa Keen, handle the music very well.  Each singer had their moment to shine and their voices blended very nicely while all three were singing in unison.

Unfortunately there was a sound balance problem making the lyrics very hard to understand for much of the work.  It was too hard to keep track of the story and ultimately I gave up and just enjoyed the overall sound of the voices and the music.

The work is performed on a visually striking set by Imogen Keen.  The ordinary day-wear costumes lacked interest but the lighting by Niklas Pajanti added a fine atmosphere to the show.

The overall look of the show has been well directed by Caroline Stacey but the constant moving of microphones with the long cords by the cast was distracting.

This is a story worth telling and the music was the highlight of the show.  It needs more work on the words and clarity of delivery to really take off.

Posted by Canberra Critics Circle at 11:17 AM