BLINDED BY THE LIGHT

Life was all mapped out. Young Javed would become an accountant, an estate agent, or even a lawyer, and would leave finding a wife to his parents. With his job and wife-to-be taken care of, all he had to do meantime was go along with his father’s wishes. At home, the opinions of his dad were the only ones allowed.

As a boy from a Pakistani family living in Britain in the 1980s, Javed (an engaging performance by Viveik Kalra) felt trapped, but it helped to write and he kept diaries throughout his teenage years.

This exuberant musical comedy, Blinded by the Light, is based on a memoir, Greetings from Bury Park, by Pakistani-British man, Sarfraz Manzoor, who became a journalist and broadcaster – not another taxi driver – and a lifelong fan of the music of Bruce Springsteen. To date, he has attended more than 150 live Springsteen concerts.

It was an ugly time in his adopted country. Margaret Thatcher was Prime Minister, there was widespread industrial turmoil and unemployment, and the National Front was prowling the streets. In times like those, it wasn’t so silly of Javed’s father, Malik (Gurvinder Ghir), to insist his family – wife Noor (Meera Ganatra), two daughters and son - kept a low profile.

The family lived in Luton, which didn’t help. With traffic on the motorway pouring past to the north or to the shimmering capital to the south, Luton felt on the way to somewhere else, an arrow to nowhere off the M1. Life must be happening somewhere, anywhere but here.


For some reason, the film tries to explain how Springsteen, proud working class, Anglo man from New Jersey, could speak to a couple of South Asian teenagers

Even his good friend and neighbour, Matt (Dean-Charles Chapman), an uninhibited Anglo, has a girlfriend, belongs to a band and his dad (played by an barely recognisable Rob Brydon) is cool. Though Matt, of course, doesn’t know it.

This was Javed’s lot. An outsider, until the day everything changed. In the school cafeteria, over baked beans and chips, the only other student from the Subcontinent, Roops (Aaron Phagura), a Sikh, hands him a couple of Bruce Springsteen cassette tapes, saying ‘The Boss’ is ‘the direct line to all that is true in this shitty world’. Pretty soon, Javed is a convert too.

For some reason, the film tries to explain how Springsteen, proud working class, Anglo man from New Jersey, could speak to a couple of South Asian teenagers, one Sikh and one Muslim, trying to make sense of life in Britain. Lines from Springsteen’s lyrics float around Javed’s head as he listens in private on his Walkman, as though it needed an explanation. It doesn’t. Music is the universal language. 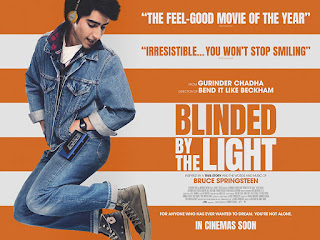 The filmmaker, Gurinder Chadha, and her husband Paul Mayeda Berges collaborated with Manzoor on the screenplay. Blinded by the Light has her familiar distinctive touch, and the sly but generous humour typical of Chadha. She has a knack for keeping it light even though her focus is the on tricky subjects like relations between Anglos and Asians, and the need to reconcile tradition with modernity.

Chadha’s last film, Viceroy’s House in 2017, dealt with the weighty subject of the final days of the British Raj in India. It was probably notable for Gillian Anderson’s performance as Lady Mountbatten, but though well-intentioned it was surprisingly dull.

Chadha has been at her best with stories about immigrant families from the Subcontinent in Britain. Stories like Bend It Like Beckham in 2002, about a Punjabi Sikh girl infatuated with Britain’s football superstar, and Bhaji on the Beach, in 1993. These are films with a keen eye for the idiosyncrasies and contradictions of social customs and cross-cultural interaction and it’s what we see here in Blinded by the Light. Social commentary is Chadha’s forte.

The irrepressible Rob Bryden has a small role here but as Matt’s dad, who appeared to have a positive, liberal influence on both his son and Javed, but his character is under-developed.

At 117 minutes, Blinded by the Light is over-long, even though it is important to get to know the characters in stories like these, and see them in all their contradictions. Insights take time to develop, and to understand.

With people on the streets and governments locked in dysfunction, is it okay to have such playful, innocent fun with Javed’s ‘runaway American dream in Luton’? What a question.

First published in The Canberra Times on 27 October 2019, and also published at Jane's blog