Opera Australia’s touring production of Bizet’s ‘Carmen’ would be a good first time choice for anyone not sure if they would enjoy a live production of an opera.  Much of the music of ‘Carmen’ is instantly recognizable and it has a compelling storyline.  This production is very accessible, well sung and colourfully entertaining.

In Seville, the fiery gypsy, Carmen, seduces the naïve soldier, Don José.  He abandons his childhood sweetheart, Micaёla, as well as his military duties.  When Carmen ultimately leaves him for the toreador, Escamillo, Don José feels his life is ruined and threatens to kill her.

Although scaled down to tour with a smaller cast, the production set in the 1950s loses none of its power due to the very clear story-telling, fluid staging and depth of character in the singers’ performances.

The demands of touring require that alternate singers play the principal roles.  At the opening night performance here in Canberra, the role of Carmen was sung by Angela Hogan.  She brought the necessary fire and passion to the role as well as singing it very well.  Her ‘Habanera’ was especially well sung.

Iain Henderson performed Don José as a simple, inexperienced young man, making it more believable that he would fall for the charms of a worldly creature like Carmen.  His arias ‘Tell Me About My Mother’ and ‘The Flower You Threw At Me’ were sung with great sensitivity, revealing a strong insight into the man.

Danita Weatherstone was very appealing as Micaёla, the spurned but steadfast girlfriend of Don José.  She gave a powerful performance of her third act aria, ‘I say that nothing frightens me’.

Haotian Qi was in fine voice as Escamillo with the very well-known ‘Toreador Song’ performed with convincing authority.  There was excellent singing from the rest of the cast in the smaller roles and chorus parts.  The children’s chorus also performed and sang very well.

The small orchestra, conducted by Luke Spicer, gave a pleasing performance of the score, bringing out all the colour and passion in Bizet’s music. 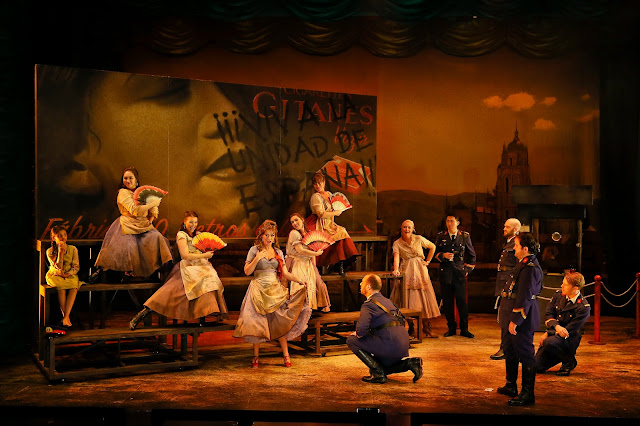 The touring set designed by Anna Cordingley depicts four distinct locations.  It evokes the 1950s era very well, especially the second act bar room.  Cordingley’s costume designs are colourful and right for each of the characters and the period.

Director and choreographer, Matthew Barclay, has produced a fine show that works very well in its 1950s setting.

Posted by Canberra Critics Circle at 11:13 AM