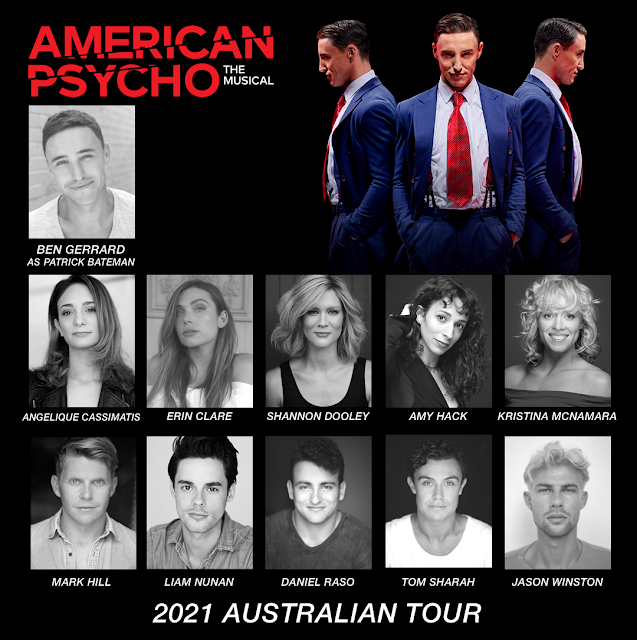 
My response on the night was very confusing.  I have needed a day or two to understand why.

Despite appreciating the high quality singing, dance work and acting, for which the whole cast deserves an award for handling such complexity, especially of choreography and changing props and costumes, I weirdly found myself feeling bored by half way through the first hour, and even wondering whether to bother coming back after interval.  Fortunately the second half was more interesting theatrically – but then the ending left me unsure about how to interpret the production’s intention.

So my questions are: was it really satire?  And did the continuous use of the revolving stage work?  I think not on both counts.

On the revolve, though a good idea to solve the problem of a static set design like the one used on Broadway, the device of continually changing scenes with the main characters always walking in the same direction (anti-clockwise while apparently going nowhere) at a regular pace seems like a good idea, to represent perhaps the social lifestyle of Wall Street wheelers and dealers, the pressure of continual activity for the central character Patrick Bateman, and a way of competing on stage with the flexibility of scene presentation available on film.

To make it exciting, very often mirrors reflected lights which, in the Canberra Playhouse, flashed horizontally directly into my eyes in Row G.  So in addition to becoming bored with watching the revolve revolve, I had to close my eyes in defence against bright light battery.  By the end of an hour, even the longer stop in Patrick’s unit as he built up to chopping off his rival’s head couldn’t revive my engagement.  It wasn’t dramatic – just another in the series of events in an uninteresting life.

In the  early part of the second act the travel stopped for longer in the scenes in Patrick’s office with his secretary, and a degree of drama seemed on the cusp of happening.  Of course, Patrick’s reneging on our expectation that he would kill her, on sentimental grounds, was entirely predictable.  Perhaps this was meant to be satirical – it was certainly unrealistic – but it wasn’t funny either.  Good satire has to be funny, until it reaches a point of apparent reality where it’s funny no longer.

So, in this production, or maybe in the original script which I have no access to at the moment, Patrick – apparently still in role – steps off the revolve to explain in a Puckish “If we shadows have offended… /And this weak and idle theme, / No more yielding but a dream” speech.  But what happened to the satire?

It just fades away into oblivion, as if the whole horrible story of Capitalism’s seeds of its own destruction can be just put aside as if it doesn’t really matter.  It seems we are left to take what we have seen as no more than an upbeat dance-style pop entertainment.  It feels cynical, rather than an incisive satire of the very society which caused the Great Financial Crisis in 2008 and the rise of Donald Trump, whose fall is not yet – or maybe never will be – guaranteed.

So I apologise to those who described this production of American Psycho - The Musical as “Slick, sexy and highly disturbing.” (The Guardian).  I think the directing and design was based on an intellectual concept which, for me, fell into a trap set by the original novel.  The Canberra Theatre Centre’s promo calls it a “hilarious musical” of the absolute superficiality of life “in [the] epicenter [sic] of excess”.  The massive surround-sound system, the excess of lighting, the continuous revolve, the over-stylised characterisation in the acting and singing, and extremes of ghastly dancing creates a show as shallow as the lives of its characters.

You might say it was slick and sexually titillating, but it never offered the theatrical depth to be disturbing.  And that, for me, was disappointing.