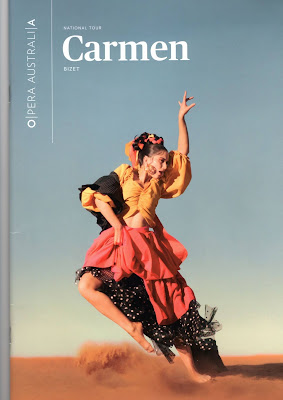 It’s a little difficult when I can’t be sure who was playing which roles on the night, even after inspecting off-stage headshots in black-and-white in the full program.  I had hoped the single sheet handout, which most of the audience relied on, would have been more specific.

So, without naming names, I can say that Carmen was a terrific singer, actor, dancer and castinet player; Don José’s character seemed wishy-washy to the extent that Carmen should have got her bikie gang to shoot him very early in the piece (and his dishevelled costume when out of uniform was a distraction rather than a statement about his character).  Escamillo never had the charisma in voice or physical presence to create the champion bullfighter character he needed to be to make me accept that he could be so famous or that Carmen would be interested in him, even for his money.

I thought the most sincere character, not just in the plot but in her performance, was Micaëla.  I began to feel this play is really about her as the central character having to come to terms with the superficiality of all the others’ passions and self-destruction tendencies.  That idea at least gave me some sense of purpose in this production: but it’s not the kind of thought expressed in Matthew Barclay’s Director’s Note.

So I couldn’t stop myself digging out my program and my 2016 review of John Bell’s directing of Carmen for Opera Australia.  His was a show full of emotion – in fact horrifying at the very end, just as Barclay said it should be when he wrote “Their final confrontation is a tragic irony”.  But in this 2021 production, the ending was almost comic as the two of them chased around on the raised platform hidden from the crowd cheering the bullfighters on in the arena behind them.  How could the two productions by the same company be so different?

The answer is clear in the two Director’s Notes.  Barclay’s is all about “I wanted with this production to bridge the distance between 19th Century Spain and regional Australia [where this tour travels to] and create familiarity – advertising billboards [which is the central component of the set design], bleachers, cops, a motorbike, a diner, a drive-in [which explains the sections of black-and-white movie mysteriously appearing at times on the back of the billboard].  All of these evoke a sense of nostalgia for a vintage, postcard Spain and memories of our own experiences of unrequited love, jealousy, frustration, guilt or youthful rebellion.”

Well, I’ve been around for eight decades and had all those experiences and memories.  It’s an interesting idea, but I can’t say I had a sense of nostalgia evoked in me.  That isn’t what Carmen is about, I suggest.

What it is about, is what John Bell wrote: “Coming to Carmen as a theatre director, the thing I find most exciting about the opera…is the accuracy and savagery of its psychology.”  And his production focussed with pin-point accuracy on how Don José’s “infatuation makes him Carmen’s slave, but he quickly develops a possessiveness that seeks to contain her, and Carmen will not be contained” and how “Carmen is infatuated with her fantasy of José, not the man himself.”

Barclay’s production is based on ideas external to the emotional drama; while Bell’s made the characters’ internal and conflicting emotions central to his design and the performances.  Bell’s was, indeed, exciting – and raised directly in our emotional responses the reality of what Barclay said he wanted to raise: “Violence confused as love may be inconceivable to many of us, but 150 years after Bizet wrote this opera, such violence is taking place between Australians in alarming proportions.”

Oddly, this year’s program cover image, above, looks much more suited to Bell than Barclay.

But Barclay got distracted into billboards, turning gypsies into criminal bikies, and imagining he had updated us to “1960 in Franco’s Spain, with church and state ruling with formidable power.”  I missed that completely until reading his note after the show.  I should have recognised the Norton 350cc motorbike, I suppose.

The touring production was, of course, limited to a smaller cast than on the main stage at Sydney Opera House.  This explains the alternating and doubling up of actors in various roles, and became the reason (starting from Barclay’s conception) for using the physical billboard structure, turned around in different configurations in each act.  There could be nothing like the massed Cubans in Havana that Bell could offer.

But in the end it is the directing concept which has limited Carmen 2021, away from the depth of human interaction which the story and the music require, towards an externalised set of ideas about symbolic actions and images which the audience is supposed to interpret intellectually.

For me, then Carmen 2021 is the presentation of an opera on a stage, rather than an inner experience of emotional depth through drama.  Technically very good; theatrically a bit pedestrian.