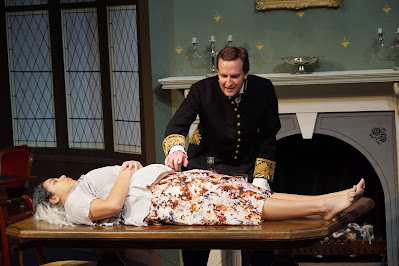 BEATRIX Christian’s “The Governor’s Family” had its first airing at the 1996 National Playwrights Conference in Canberra, followed in 1997 by a season at Belvoir Street.

Since then, the play seems to have faded into obscurity until Canberra Rep, directed by Tony Llewellyn-Jones, took it on last year – but, as a result of covid restrictions, held it over until now.

A gang-rape in 1886 Sydney ostensibly provides the historical basis of the play.

Public outrage ran high and most of the teenage culprits were hanged, while others received long prison sentences. The victim was subsequently taken into the Governor’s household; she later moved to New Zealand, where she died an early death.

Christian sets the action in 1897 and identifies the rape victim as being of Aboriginal descent, although it seems unlikely that the public outrage and the resultant harsh penalties would have followed if the victim had not been a member of the white community.

Other issues with which Christian infects her fictional vice-regal family include sibling rivalry, youthful rebellion, parental ineptitude, potential incest, gubernatorial miscegenation, marital deceit, gender transition, to name a few. Behind this jungle of issues looms the debate about the inevitability of Federation.

Christian undoubtedly has a way with words, but a less secure grasp of how to put these words into the mouths of believable characters in credible situations. As a result, this play constitutes a moderately interesting depiction of the colonial, racial and domestic culture at the turn of the century, but one wonders at its contemporary relevance and entertainment value.

The evening begins with promise, as I survey the splendid panorama, on three huge panels, of a reproduction of an early eighteenth-century watercolour of Sydney Harbour and the surrounding bush. The central image is mounted on the revolve ingeniously designed by Andrew Kay to provide for three or four domestic settings; its repeated rumbling machinations, however, become somewhat intrusive as the evening proceeds. 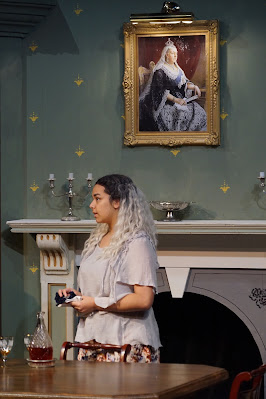 Likewise, Caitlin Baker cannot be expected to meet the challenge of melding the numerous facets of the wilful Lara into a cohesive whole as she transitions between genders, manipulates not only her father and brother, Gerald (played by Robbie Haltiner), as well as Irish lower-class potential swain Tammey Lee Mackenzie (no relation), while finding some way to cancel her newly-found Aboriginal half-sister.

And then there is Lady Helena, tellingly referred to throughout by the Governor as “Mother”, who has retreated into the solace of laudanum, which she shares with her mummy’s boy, son Gerald, fan of Oscar Wilde. Antonia Kitzel attacks this role with a vocal range from inaudible simperings to ear-splitting rage, and not much else between.

Jack Casey gives a stolid performance in the redundant role of Irish immigrant fruitlessly defending his rapist brother and seeking the affections of the feckless Lara.

The most intriguing character is that of Frances Pod, played in her first stage appearance by Kiara Tomkins. It is a difficult role. As contrived by Christian, the character is loaded with all the isms (racism, paternalism, sexism, colonialism, elitism, etc), but Tomkins finds a central quietness which is otherwise not available to those playing Christian’s other characters.

After a long night’s journey through the vicissitudes of this unlikely menagerie, Christian is able only to offer a conclusion which is neither bang nor whimper.