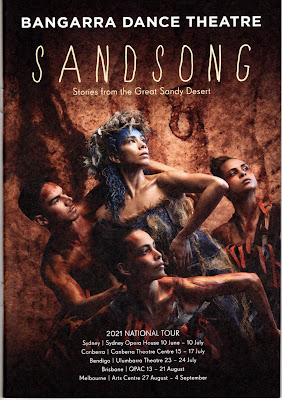 
SandSong is a major work of celebration tinged with sadness, the four seasons representing the history of the people.

The dance is a drama of the establishment of ancient Indigenous culture, seemingly against the odds in cold and dry Makurra when “Time and space collide in a cloud of black collective consciousness”;

of new cultural understanding in the hot and dry Parranga – a “meditation on fragility, survival, balance, knowledge, life and death;

of the strength of culture needed in the time of Kartiya – the invasion of the land and the “lawlessness of a new frontier and the whims of station owners” when “people begin their new life…in servitude”;

of the determination in Yitilal, the Wet Season, by which “the spirit of people and place endures to stand strong in their kinship and belonging”.

The sadness?  “SandSong is our way of honouring and paying respect to our sister Ningali, to her People and Country” who “passed peacefully, surrounded by family and friends” in 2019 when “seriously ill in an Edinburgh hospital while on tour with Sydney Theatre Company’s production of The Secret River.”  Stephen Page and Frances Ring describe in their essay “Caring for Story” how they were able to “travel with Ningali’s family to Edinburgh to farewell and bring home our beautiful and irreplaceable friend.”

You may remember the impact of Ningali Lawford, as I do particularly for Solid,  a Black N'2 production for Yirra Yaakin Noongar Theatre by Ningali Lawford, Kelton Pell, Phil Thomson.  Courtyard Studio, Canberra Theatre Centre, 2001. (Review: Canberra Times, and available at www.frankmckone2.blogspot.com.au).

Solid ended in ironic humour with "How would you like your tea?  Black n'2 like you and me." 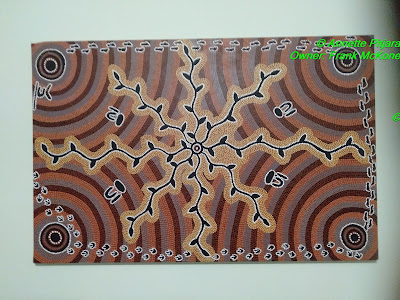 SandSong in dance is like the picture that hangs on my study wall: Wild Yam Dreaming by Annette Pitjara.  Just as dot painting and non-representational symbolic figures are ancient Australian forms of art which seem to be ‘modern art’ in the eyes of non-Indigenous viewers, so Bangarra’s dance – firmly based in the traditions of the Wangkatjungka and Walmajarri peoples of the Kimberley and Great Sandy Desert regions, the Lawford family’s people – integrates the ancient and ‘modern dance’ forms.

The effect then is not a focus on plot, not on linear story-line.  Each scene creates a mood, from images and movement, which take us along through experiencing living on this Country.  As in the painting, there are often small details of shape or action in the dance which an outsider may recognise as Aboriginal linked in with modern dance style.  Watching is to absorb the whole as an atmosphere.

Steve Francis’ sound is an eclectic gathering of songs, musique concrète and spoken word which makes an aural space for the dancers to perform in.

Following Bangarra’s 30 years of sixty five thousand, I see SandSong as a powerful symbolic representation of what it means to be Aboriginal – of the importance and place of Australia’s First Nations in the formation of our total culture, and therefore of central importance to us all.

Posted by Canberra Critics Circle at 11:45 AM