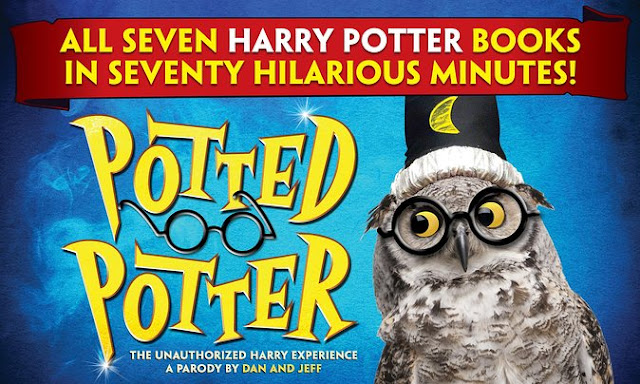 If you’re concerned that not having read the Harry Potter books will affect your enjoyment of “Potted Potter”, don’t worry.

Back in Canberra for a second season, this crazy show takes on the challenge of condensing all seven very big books of the Harry Potter series into 70 minutes.  Impossible?  Well, yes it is, of course, but that doesn’t stop the two very busy New Zealand actors, Adam Brown and Tama Jarman, from giving it their best shot and entertaining us in the process.

I have read the books and seen the movies so I did know the difference between a horcrux and a Hufflepuff.  There’s only one joke late in the play involving book six that works best if you know what’s about to happen in the story.  The apparently well-read audience I saw it with were on to the joke immediately, clueing the rest of the audience in.

The two performers are both expert and appealing comedians with a highly developed sense of comic timing and the ability to involve an audience directly.  Adam Brown plays Harry Potter for most of the time and Tama Jarman plays nearly all of the other characters using a myriad of costumes and props changed with dizzying speed.

Jarman’s maniacal delivery is hilarious and he won the audience over immediately with his crazy antics and comical interactions with us.  Brown is equally amusing as Harry Potter and in his exasperation as the straight man dealing with Jarman’s whirlwind gallery of colourful characters from the books.  With dialogue delivered at such high speed, clarity of diction is very important and both actors can be heard clearly at all times.

The set, props and costumes have been well-designed by Simon Scullion.  The costume for the Golden Snitch is worth the price of the ticket alone!

The advertising for the show says it is suitable for all ages from six to Dumbledore (who is very old indeed).  Several children around me were clearly enthralled by the show and especially enjoyed the fast and furious game of Quidditch that the audience was invited to play along with the actors.  I think our team won.

This review was first published in the Canberra City News digital edition of 14 July 2021.