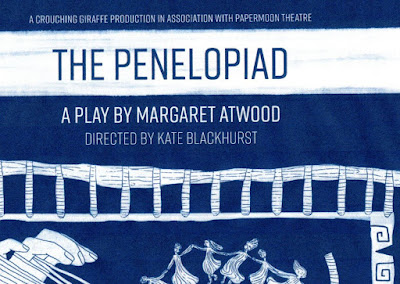 Margaret Atwood, of The Handmaids’ Tale fame, dedicates her novella, The Penelopiad, “For my family”.  I wonder how her family felt on reading, and later watching, the often touching but ultimately horrifying story of Penelope, the wife of the putative hero, Odysseus, who rescued Helen of Troy.

Now, speaking from Hades, “being dead – since achieving this state of bonelessness, liplessness, breastlessness” – that is, her story being forgotten or never even recorded – Penelope begins with a warning to us all.  “I’ve learned some things I would rather not know, as one does when listening at windows or opening other people’s letters.  You think you’d like to read minds?  Think again.”

Of course, as Elaine Noon spoke these words, we all immediately fell into Atwood’s trap, held there for two hours’ traffic on the stage - and even beyond the Maids’ last words, as they sprout feathers, and fly away as owls:

In some other productions, a long table, behind which Penelope sits, is a central static fixture.  What I like especially about Cate Clelland’s set is its flexibility so that movement is at the core of the drama: it’s a story told in action, in a way I imagine similar to the way mythical stories of Aboriginal people are performed, as much in dance and song as in speech.

In one production (isn’t Youtube marvellous?), Odysseus is played by a man.  For me it seems essential to have the whole story presented by 13 women because the play is grounded in the perspective that only women can have.  When Heidi Silberman, one of Penelope’s close maids, takes on the role of Odysseus, there is humour and irony which does not happen if a man is brought in for that role.  The same is true later when the roles of the men suitors, who raped the maids in the story, are played by those very women.

There is a very nice interview with two women in a production which, I think, has the right ‘feel’.  Uploaded by Xtra Magazine at

it’s about the Nightwood Theatre production: “Margaret Atwood's The Penelopiad makes its Toronto remount at Buddies in Bad Times Theatre”.  Perhaps Margaret Atwood herself was there.

I like, too, the symbolism built into the set design, of the huge woven wall hangings which seem to represent the stage as in Ancient Greek times, and perhaps were woven by Penelope and her Maids.  The costumes, too, take us seemingly back to Ancient Greece, but give us a range of distinct characters as members of the Chorus take on roles in the story.

The music, voicing and singing, part and in unison, also do more than form a sound-track.  The production, seemingly simple in the intimate small-scale Studio space, has all the elements of drama working together with purpose and artistic integrity.

This Penelopiad is my kind of theatre – strong in its intention; powerful in its effect and its message.  When I hear the occasional boobook owl, the currawongs whooping or the sulphur crested cockatoos screeching every day around my home, I know Penelope and her Maids are reminding me that “we took the blame / it was not fair”.