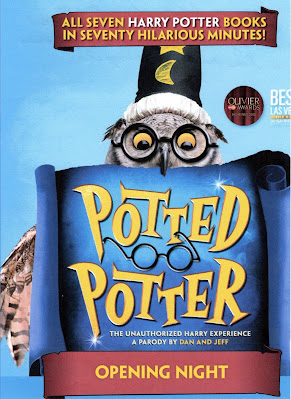 Performed by Adam Brown (Harry) and Tama Jarman (Everybody Else)

Fortunately, I have not read the seven volumes of Harry Potter, and now – after an hour’s entertaining clowning – I will never need to.  As they demonstrated, the character of Harry Potter is essentially boring, and the only relationship of any real interest – between Hermione Granger and the red-haired guy Ron Weasley – gets a passing mention right at the end.

What horrified me most was how much I recognised.  What is it about ludicrous pretend mediaeval witchcraft fantasy that, in the modern rational world, can become an essential element in our consciousness?  The value of this absurdist parody is that at least the young aficionados in the audience thoroughly enjoyed laughing at it.  Potty Potter, I call it.

Even more ironically absurd is how the show was born as a promotion of J K Rowland’s sixth volume in the series way back in 2005. www.pottedpotter.com.au/ explains: Dan and Jeff are asked to create a five-minute street show recapping the plot of the first five Potter books, for performance to queues of fans waiting for the midnight release of the sixth book.  At least it means that the quality of British humour is not lost, and has even been touring the world, beginning very sensibly with Australia and New Zealand, since 2009.  These are facts of which I was previously completely oblivious.

When you look at sites like https://harrypotter.fandom.com/wiki/Hortense_Rowland perhaps it’s best to say that the Harry Potter phenomenon is a diversion away from reality for its fans, while money-making for its creators.  The social structure of J K Rowland’s fantasy is, unfortunately, entirely predictably conservative politically – so there is little of artistic value in her work, which is why it is so easy to parody.

There is one element of Potted Potter of educational value.  Most of the comedy is made out of the interplay between the actors out of their Potter characters, creating a story of their relationship.  Adam is played as the bookish type, seriously concerned with doing things properly (and therefore plays Harry); while Tama is just interested in having fun, and breaks all the rules.  This is what makes the show enjoyable – nothing really to do with Rowland’s books.  The show works because it breaks the conventions of theatre as the actors jump in and out of their Potter roles and their roles of being actors: talking, for one example, about their training in theatre school in New Zealand; and supporting more pay for teachers, at one point (achieving real approval from the audience).

So, now I’ve dragged you out of the fantasy, forget the world around you for an hour – and enjoy!

Posted by Canberra Critics Circle at 11:05 AM