You’d have to be potty not to split your sides laughing at Potted Potter. Olivier Award nominated writers and creators Daniel Clarkson and Jefferson Turner have achieved a cleverly compacted seventy minute parody of JK Rowling’s seven Harry Potter books. Like its popular predecessor The Complete Reduced Works of Shakespeare, Potted Potter began its life as a Fringe show, and retains much of that playful Fringe exuberance and high octane fun. To attempt to encapsulate JK Rowling’s densely packed adventures of Harry Potter, Ron Weasley and Hermione Granger at Hogwarts School for Wizards and Wizardry is scaling the heights of absurdity but Clarkson and Turner have made magic with their artful adaption. There is enough of the essential storyline to keep the Potter tragics in the audience enthralled and swept along by the sheer momentum of the production. Even those among us who have not been bewitched by Rowling’s series of   books from Harry Potter and the Philosopher’s Stone to the final Harry Potter and the Deathly Hollows  could follow the clearly described narrative and be captivated by the performances of actors Adam Brown and Tama Jarman. 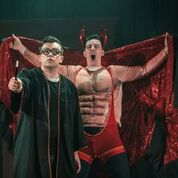 Brown and Jarman take on the stock comedy team of straight man and fall guy in the tradition of Laurel and Hardy, Martin and Lewis, Morecombe and Wise and Abbott and Costello. Brown is the straight man, taking on the role of Harry Potter, which admittedly has none of the fun and foolishness of Jarman’s madcap clowning characters from a mop-haired Weasley, to a benign Dumbledore and hairy Hagrid as well as many more minor characters and the villainous Severus Snape and devilish Voldemort. With mercurial changes of funny hats, wigs and silly voices Jarman dashes in and out and roundabout like an actor on yuppie beans, while Brown struggles to keep the action on track. Together they are the perfect team, slick on timing, quick on cue, bouncing off each other and keeping the audience glued to the stage as Harry battles Voldemort’s snake and Jarman rattles off Harry’s confrontation with the Dementors depicted in an animated video. 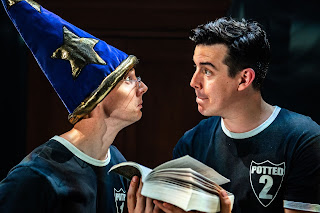 No performance would be complete without a Quidditch match with the audience divided into the Gryffindors and the Slytherins and Brown making an hilarious entrance as the Golden Snitch. Shouts and cheers are banned in a Covid conscious theatre, but loud clapping and foot stomping keep the audience hyped. After all, this is parody – a grossly exaggerated jibe at the most popular children’s books of all time. There is no point in being reverential when two excellent actors can be let loose on a stage to revel in their mockery while sending the most devoted Potter fans into fits of laughter

To bring the parody full circle, Brown and Jarman close with twisted lyrics for Gloria Gaynor’s I Will Survive and Frank Sinatra’s My Way. They certainly did their madcap romp through the Harry Potter Books their way, and judging by the audience’s enthusiastic response, kids and grownups alike, they wouldn’t have had it any other way. Potted Potter is a wiz of a show!