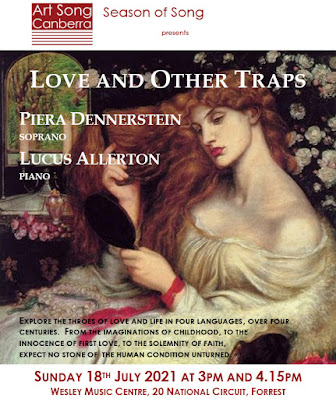 Love doesn’t always run smoothly and Art Song Canberra’s concert, ‘Love and Other Traps’, covered a wide range of rapturous songs and some unsettling songs involving loss and even death.  The nicely balanced program included several very well-known songs as well as some lesser known ones.  There were songs by Scarlatti, Giordani, Debussy, Fauré, Schubert and Britten amongst others.

Soprano, Piera Dennerstein, completed a double Bachelor in Music and Arts (Hons. 1) at the Sir Zelman Cowen School of Music at Monash University.  She has performed in opera in France, Italy and China and has worked extensively in Australia with the Victorian Opera Chorus and Lyric Opera of Melbourne as well as in corporate events.

The program commenced with Scarlatti’s ‘If Florindo Is Faithful’.  Dennerstein sang it with great passion and accuracy, giving the song an unexpected and welcome depth of characterization.  She is clearly a fine actress as well.

Moving on to the very well-known ‘Caro mio ben’ by Giordani, she sang it with great tenderness but with strong feeling underneath the words.  Revealing to the audience that she is Italian and that her friends’ nickname for her is ‘Pavarotti’, she then gave us a sparkling and fun ‘O solo mio!’.  It was sung with great joy and her powerful voice easily handled the sustained high notes in the song.

Other highlights in the program included ‘Pierrot’ by Debussy, ‘Ave Maria’ by Schubert, Britten’s ‘Death Be Not Proud’ and Fauré’s ‘Fleur Jetée’ with a masterful performance by Allerton of the complex accompaniment for this song.

Both performers gave friendly, often amusing and informative background information about the songs and their down to earth delivery easily won their audience over.  Dennerstein’s love of singing was obvious throughout the program and she shared that joy with vivacity, passion and skilful singing.

Once again, Art Song Canberra has given us a superb concert with two very fine performers.

Posted by Canberra Critics Circle at 9:57 AM