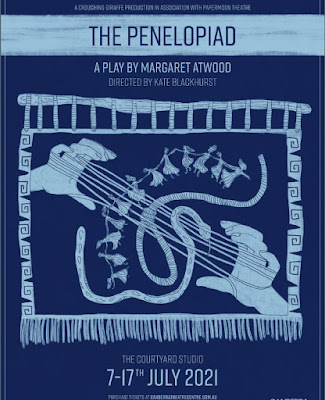 We know the story of Odysseus, king of Ithaca, and his heroic exploits from Homer’s epic poem, ‘The Odyssey’.  After fighting in the ten year long Trojan War, it took him another ten years to journey home.  In the meantime, his wife, Penelope, with the support of her handmaidens and her son, Telemachus, were staying one step ahead of a group of suitors for Penelope’s hand in marriage.

While Odysseus has always been centre stage in this story, Margaret Atwood’s play focusses on what might have been going on back home during Penelope’s long wait for her husband.  At the start of the play, Penelope is already dead, so she is relating her story directly to us from Hades.  How much of her story is filtered through her memory and how much is Atwood’s artistic licence is up to us to decide.

Performed by thirteen women, the central character of Penelope is surrounded by twelve handmaidens.  The male suitors and other male characters, including Odysseus and Telemachus, are also performed by the actresses playing the handmaidens.

Elaine Noone gives a fine central performance as Penelope growing from a young, inexperienced 15 year old to an elderly woman who learns over time to use her wits to survive.

The handmaidens are played by a number of well-known Canberra actresses who all give strong, individualistic performances.  As well as their individual characters, they are also the Greek Chorus of the play, performing the chanting, singing and dancing very well.

The attractive and clever set design by Cate Clelland and the level of detail in the attractive costumes designed by Annie Kay add considerably to the atmosphere of this production, as does the choreography by Brooke Thomas.

The original music in different styles by Glenn Gore Phillips to Margaret Atwood’s lyrics is especially fine and quite appealing.  It is well sung by the cast, including some pleasing harmonies.