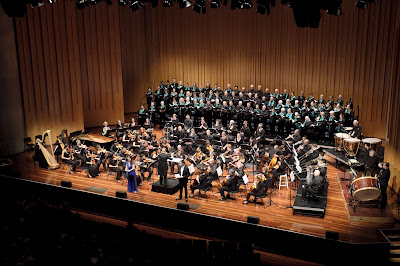 Christopher Gordon’s ‘On the Beach’ Suite is an arrangement of the music he originally composed for the television movie of the same name in 2000.  It was based on Nevil Shute’s novel about the aftermath of a nuclear war in the northern hemisphere and the gradual deadly impact of radiation fallout on people in Melbourne, Australia.  The composer has given this doom-laden subject a striking score.  Dark wartime themes contrast with a lush love theme as well as sequences of jazz and soaring music lifting the spirits of the ultimately doomed characters.

It was a fine performance of this work.  The orchestra played the beautiful love theme with emotional warmth and the choir sang the sorrowful third movement with great assurance and feeling.  The finale was especially moving, bringing out the sense of tragedy in the music.  Christopher Gordon was in the audience and appeared to be very happy with the performance.

British composer, Ralph Vaughan Williams, took seven years to complete the composition of ‘A Sea Symphony’.  It had its first performance in 1910.  It’s a huge work for orchestra, soprano, baritone and choir and it runs 70 minutes in four movements.  The text of the work is taken from ‘Leaves of Grass’ by the poet, Walt Whitman.

The full company of orchestra and singers gave this work a resounding performance.  Leonard Weiss conducted this formidable symphony with great skill and confidence and his orchestra brought out the full colour and drama of the music with accurate and sensitive playing.  Chorus Master, Dan Walker, obtained a beautifully clear and pleasing sound from the choir.  Both soloists – soprano, Chloe Lankshear, and baritone, David Greco, - excelled in their performances as well.  Their duet in the final movement was superbly sung.

These two works demanded a lot from the performers and everyone involved should be proud of the result.  It was a memorable evening of great music.
Photos by Peter Hislop
Len Power’s reviews are also broadcast on the Artsound FM 92.7 ‘In the Foyer’ program on Mondays and Wednesdays at 3.30pm.