The Tragedy of King Richard the Second

The Tragedy of King Richard the Second by William Shakespeare 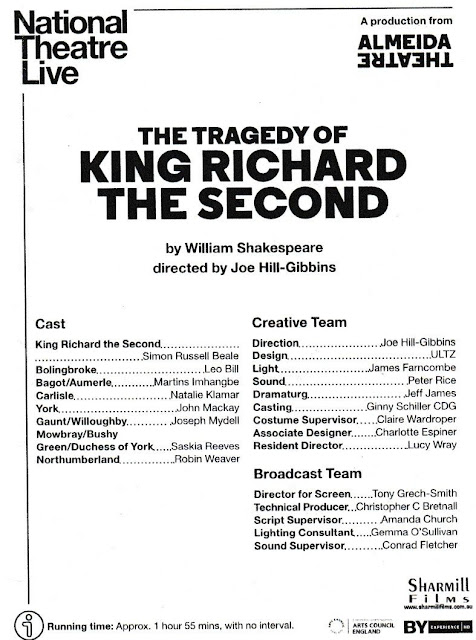 This modern pared-down but full of symbolism interpretation of Shakespeare’s Richard II is absolutely fabulous theatre by London’s Almeida.  I mean this literally, for it shows Shakespeare’s genius for fable-making – turning (for him) a century old history into an everlasting story of universal significance.

Director Hill-Gibbins’ genius is to have turned (for us) a 400-year-old work of theatrical art into a gripping emotional and intellectual experience – a study of the nature of political power – of crucial importance to us, now, as it was for Shakespeare and his audience, then.

How is it done?  What does it mean?  Why should Almeida Theatre be so highly praised?

Here’s how a different recent production was done:


[In 2016] Jack Gamble and Quentin Beroud’s Richard II is the first Shakespeare play to have been performed at the House of Commons. The opening performance at the prestigious site sought to emphasise the relocation of the play into modern Westminster by literally taking the action there.
[ https://www.theupcoming.co.uk/2016/05/04/richard-ii-at-arcola-theatre-theatre-review/ ]
[Then back] at Arcola Theatre the set consists of little more than a desk and regal chairs hinting at the political-meets-royal dimension of the reinterpretation. The modernisation of Richard II is intended to point out that the essence of political conflict is timeless, and that the dynamics of power can be easily transferred and applied to a modern setting.


In 2018, at Almeida the set is a single room made of iron walls, high, with no doors or windows – the prison in which Richard, king by divine right, is held without hope by his usurper, Bolingbroke.  But note that all the cast of nobles and the commoners who serve them, are all equally trapped – yet cannot learn to live together.  As Bolingbroke finally ‘wins’, his power is already being challenged by the next generation as illegitimate.

I call this production a modern interpretation because of a simple device: the end is a repeat of the beginning, which has to remind one of Samuel Beckett’s Waiting for Godot – who never comes.  Richard speaks directly to us, saying “I have been studying how I may compare this prison where I live unto the world…Thus play I in one person many people, and none contented: sometimes am I king; then treasons make me wish myself a beggar, and so I am: then crushing penury persuades me I was better when a king: then I am king’d again; and by and by think that I am unking’d by Bolingbroke, and straight am nothing: but whate’er I be, nor I nor any man that but man is with nothing shall be pleased, till he be eased with being nothing.”

How is this, then, in a world where we are all made to believe that we can all achieve our ‘dream’: we will all have a fair go, if we give it a go.  But the reality is what our caretaker prime minister actually said – to encourage us to vote for his party again next month: “We’ll give a fair go to those who have a go”.  As Charles Body of Canberra suburb, Kaleen, wrote in a Letter to the Editor in The Canberra Times, today [who] “will decide who is having a go.  Bad luck to those individuals who through disability or for some other reason are deemed not to be having a go.  How sad for our nation that care and compassion are now available only on a user-pays basis.”

Or, as Shakespeare wrote, in effect, those deemed not to be having a go must be “eased with being nothing”.  When this line repeats, near the end, Richard seems to have lost himself in a dream, hearing mysterious music, “and now time doth waste me; For now hath time made me his numbering clock.”  Yet still he lashes out and kills two before Sir Pierce of Exton ‘strikes him down’.  Is this what ‘having a go’ means, rather than being ‘eased with being nothing’?

So this design, of actors in rehearsal clothes, in a set in which they, the walls and the floor become mired in mud and blood, becomes far more than a mere study of political conflict – monarchy or people power – but takes us to where time ticks us all in his numbering clock.  In Shakespeare’s day, of course, people died young; yet today with all our technical advances so we have longer to live fulfilling lives of care and compassion, we still cannot learn to be eased with being nothing.  Still we, like Richard, can be “irresponsible, foolish and vain” sending our “kingdoms into disarray and our courts into uproar”, as the program notes.  And still like Bolingbroke we see “no other option but to seize power”, be “ambitious” and “challenge the throne” and the “divine right to rule”.

Shakespeare was just 31, like a modern Millennial or Generation Z, when he wrote the character of King Richard the Second from the inside.  I am never less than amazed at the maturity of his understanding; and too I am stunned by the skills of clear expression of Shakespeare’s meaning – of what each character is feeling and thinking – on the part of all the Almeida cast, with an extra plaudit for Simon Russell Beale.  He achieved as he had hoped in his preview interview, shown in this film, to help us find empathy with and even some sympathy for a king who, according to history’s lights, failed his country.

This is what great art can do for all of us, whatever the state of our country.


Posted by Canberra Critics Circle at 12:27 AM