THE CHOIR OF MAN 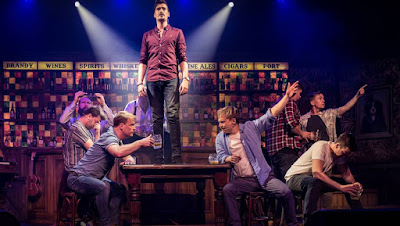 Entering the Canberra Theatre auditorium for ‘The Choir Of Man’, you’re invited up onstage to have a free beer before the show starts.  The attractive pub setting, the smoky atmospheric lighting, the loud background music and the free drinks set the tone for the show.  You’re at your favourite pub for an evening of songs.

The all-male singers are young, good-looking and energetic.  They can certainly sing and are most memorable with the group numbers where their harmony singing is superb.  They sing everything – classic rock, show tunes, folk and pub songs.  Songs by Paul Simon, Adele, Sia, Queen and more are featured.  There’s even a rousing performance of ‘You’re The Voice’ towards the end.

Music is mostly backing tracks with the addition of an on-stage piano and occasionally other instruments, all played by the singers.  One of the guys tap dances very well, too.

Audience participation is encouraged with singalongs, Mexican waves and invitations to join the cast onstage for a few lucky women.

The show moves at a pace to keep the excitement levels high.  Banter between songs was well done, if predictable.  The audience on opening night clearly was enjoying every minute of it.

There’s nothing pretentious about this kind of show.  It exists to entertain in a slick, undemanding, colourful and tuneful package that works for its target audience.  If a night of well-known songs performed by an attractive young cast of good singers is your idea of a good time, you’ll be delighted with this.

Posted by Canberra Critics Circle at 7:49 AM