The Miser by Molière – a new version by Justin Fleming.  Bell Shakespeare at  Canberra Theatre Centre, The Playhouse April 11-20, 2019. 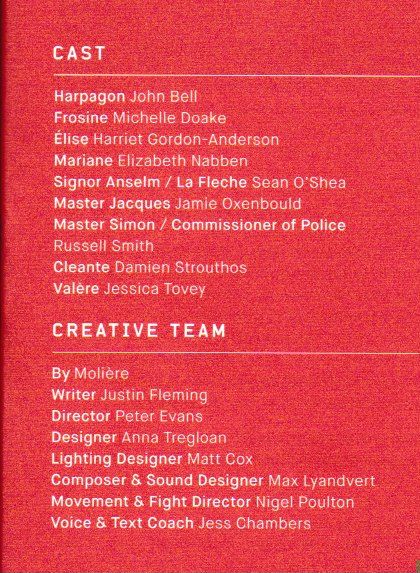 Let me reveal my personal bias to begin: I am jealous of John Bell.  Having first seen him perform (as King Henry V) in a tent at the 3rd Adelaide Festival of Arts 1964, I wish I had his capacity for characterisation (which I never had) and his loose physical flexibility – which he still has, but I have lost forever.  He’s only two months older than me, dammit.

And for him to be able to return to such quality acting in ‘retirement’ from his own Bell Shakespeare Company is just awesome. 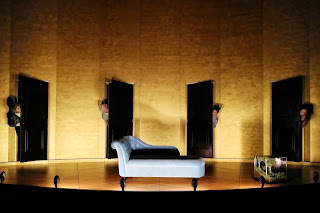 But, to this version of Molière’s 16th Century play by 21st Century writer Fleming.

Four doors onto any set says ‘Farce’.  By interval I found myself wondering if farce was enough.

But, in the final scene, John Bell’s representation of Harpagon’s loneliness and bewilderment as the lives of all those around him achieve a positive conclusion – all four doors have nothing behind them for The Miser – leaves us unexpectedly feeling for him.

His loss of control, though we may see this as his own fault, is a modern experience.  Perhaps Jean-Baptiste Poquelin, by 1668, foresaw his own end: he collapsed and died after just four more plays, during the fourth performance of  Le Malade imaginaire, aged 51, in 1673.  Like so many of us today from a middle-class background, he worked in a ‘gig’ economy struggling against insecurity of employment, trying to innovate and facing official and political intransigence.

No wonder his Harpagon was desperate to hang onto his ten thousand crowns.  Maybe even John Bell, after establishing and running a theatre company all his adult life, understands Harpagon / Poquelin – and shows us what he feels in that final scene.

So it was right of Fleming to insert into Molière’s script jokes from today’s Australia, from the squawking of cockatoos to cooking shows on tv – and including same-sex marriage.  And it was right on the part of Peter Evans to direct the acting way over the top to the point of absurdity – all picked up on, with consummate skill, by the whole acting ensemble.

And, as the pictures show, Anna Tregloan’s costumes, hair and make-up designs were right up there, though these don't show the wonderful La Fleche nor the full-frontal Signor Anselm, both played by Sean O'Shea.

While, underneath, Max Lyandvert provided a soundscape surruptitiously simple – looking for a grounding in a nicer humanity.

Bell Shakespeare, with John Bell, makes for a night of satire in a farce with a human touch.