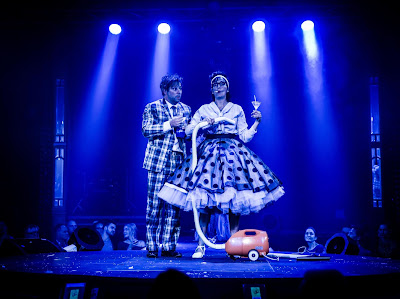 Fall in love, get married, have kids - ‘LIFE the show’ is a circus for adults inspired by the milestones of life, one that exhorts us count the hours against the pound of our racing heart.

This circus eschews a ringmaster’s banter for the wide eyes of clown Goos Meeuwsenm, who tumbles through the ages of life, and sometimes completely off the stage.

Meeuwsenm is a hapless schlemiel, a frazzled Everyman caught in the hectic workaday. After rediscovering his body he begins to gleefully chase the pleasures of life.

These pleasures include the best acrobatics I have seen on stage, with Elke Uhd’s difficult and athletic aerials, and the balance act of the extraordinarily flexible Tim Kriegler. One memorable sequence had the pair as sperm clambering up and bursting out of a giant condom.

Meeuwsen discovers his soulmate in clown Helena Bittencourt, the best match since Papageno met Papagena. In one highlight, the pregnant Bittencourt breaks water, and Meeuwsenm promptly slips on it.

In an ending that evokes the Holi festival, at the end of the show the cast are in their underwear and lathering each other in rainbow paint.

The soundtrack features possibly every American song to include a mention of ‘life’ in the lyrics, a medley that includes sources as diverse as Queen, Sweet Charity, and Coolio. More than a circus, this felt like a rock opera.

Sultry vocals by Lee Taylor and the saxophone by Blaise Garza give the show a nostalgic and jazzy flair.

This is a perfect night of entertainment, with world class musicians and circus performers, a rollicking soundtrack, and plenty of lively fun.
Posted by Canberra Critics Circle at 7:08 PM