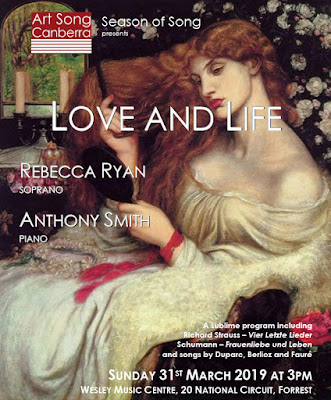 Rebecca Ryan is a graduate of Otago University in New Zealand and London’s Royal Academy of Music.  She came to prominence singing the UK premiere of the newly discovered ‘Gloria’ by Handel.  She has appeared in concert performances world-wide and has sung a wide variety of operatic roles.

Anthony Smith is a Canberra-based composer and musicologist.  He graduated from the ANU School of Music in 1999 and has performed in many countries around the world.  He has worked as an accompanist for the ANU School Of Music for many years and is the repetiteur of three major Canberra choirs.

The concert commenced with ‘A Woman’s Love and Life’ by Robert Schumann.  Rebecca Ryan’s fine soprano brought out all the colour and emotion of this eight part work.  She was particularly impressive in the quiet and reflective ‘Sweet friend, you gaze’ and the moving finale ‘Now you have caused me pain for the first time’.  Anthony Smith’s accompaniment for this verse was especially fine.

This was followed by two romantic songs by Henri Duparc.  The highlight of these two works was ‘Chanson Triste’ which was beautifully sung and played as was Fauré’s dream-like ‘Autumn’ and ‘Au bord de l’eau’ which followed.

After interval, Rebecca Ryan sang two songs by Berlioz.  The quiet emotion of ‘Absence’ was nicely contrasted with the brightness of ‘Villanelle’ and both were sung and accompanied very well.

The final work presented in the concert was ‘Four Last Songs’ by Richard Strauss.  Rebecca Ryan displayed the full power and richness of her voice with an excellent performance of all four songs.  Her singing of ‘September’ was especially moving and Anthony Smith’s accompaniment for all four songs was sublime.

This review was first published in the Canberra City News digital edition of 1 April 2019.