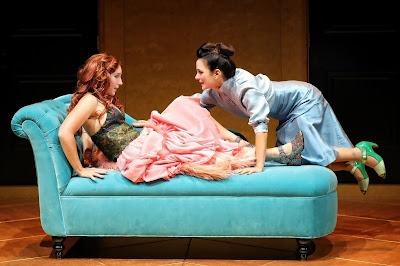 Miser Harpagon (John Bell) is so frugal he has been known to filch an oats dinner from his starving horses.

But shed any thought of a shrivelled Scrooge. John Bell as ageing miser Harpagon is a vampire that drinks gold. The vigilance he lavishes on his hoard keeps his mind sharp and his health ruddy.

Harpagon's loveable but feckless children Cleante (Damien Strouthos) and Elise (Harriet Gordon-Anderson) are smitten by paupers, but before they can break the news to dad discover he plans to marry them off to odious but wealthy suitors.

Worse, Harpagon has cast a lustful eye on his son’s beau Marianne (Elizabeth Nabben), thrusting father and son into a skirmish of wits.

Director Peter Evans casts Molière’s 1668 comedy in the world of the the 1%, fusing the courtly and the Kardashian. If Harpagon didn’t clamp his wallet tightly, you can imagine his children splurging on Birkin bags and Jimmy Choos.

Molière’s lively and extravagant satire of stinginess is brilliantly adapted for an Australian audience by Justin Fleming. Fleming’s colourful language and playful rhyme keep the play fresh and accessible.

The cast bring zest and brio to Molière, with the spotted but likeable characters tangling themselves up in a delightfully convoluted plot. Comic highlights include matchmaker Frosine’s (Michelle Doake) cynical and lavish flattery, Harpagon’s kamikaze mating dance, and servant La Fleche’s (Sean O’Shea) sneaky comments to the audience.

Jessica Tovey is a wonderful romantic hero as the passionate Valère, Harpagon's servant and Elise’s secret lover. Her dashing gusto balances the granite obduracy of Bell's ocker Harpagon, as well as planting the audience’s sympathy firmly with the young lovers.

Design by Anna Tregloan is modern but recognisably Molière, with colourful outfits and pale faces. Where once the faces were powdered, here it could just be a new Instagram filter.

The graceful finale gives everyone a happy ending, with a slight hint that Harpagon may one day find his money lonely without people to hold it over.

This playful and fresh production is endlessly entertaining. If this play is a souffle, it is one made from quail eggs and caviar, and dusted with gold.
Posted by Canberra Critics Circle at 10:36 AM