The Unauthorized Harry Potter Experience. – A Parody by Dan and Jeff.

At one stage during LunchboxTheatrical  Productions’ hysterically hilarious parody of JK Rowlings’  Harry Potter books, fall guy , Joe hurls the ultimate insult at straight man, James: “Purist!!”  There is nothing purist about Potted Potter. Actors James Percy and Joseph Maudsley launch into a madcap attempt to present all seven books in just seventy minutes of zany gags, ridiculous, bumbling business and a live game of Quidditch with a delighted audience of Harry Potter fans. You know straight away that this will be no reverential re-enactment of Rowlings’s brilliant flights of fanciful imagination when Joe whips off the cover, revealing an island scene and a palm tree by clear blue water and under an azure blue sky. “What’s that? James asks.” The Forbidden Forest.”, Joe replies, pointing to the writing on the painting. “That’s not the Forbidden Forest!” replies james. “It should be dark, and where are the wild animals that live in the woods? “There” Joe says, pointing to a crab on the sand. And that’s just the start of this madcap romp through all seven books from The Philosopher’s Stone to The Deathly Hollows.
Daniel Clarkson and Jefferson Turner’s  unauthorized Harry Potter Experience is a gift for the talents of  Maudsley and  Percy.  In the long line of comedy duos, Maudsley is Costello to Percy’s Abbot and Hardy to Percy’s Laurel. They are Martin and Lewis  and Morecombe and Wise. Percy plays the long suffering straight guy, introducing the books and then standing back while Maudsley hurls a train wreck through the events. Instead of hiring the finest actors in the land like Dame Judi Dench to play the various characters and going all out to acquire an automaton Evil Serpent and a proper set for Hogwarts, mistakenly confused with warthogs,  Joe settles for hats and wigs to change character and puppets to represent the Evil Serpent or Dobby the House Elf from The Chamber of Secrets.
To the excited fans of the books, Potted Potter is  a riotously  funny spoof that only serves to enflame the passionate obsession with the stories. It is the paradox of perfect parody that it adds to the adoration, and JK Rowlings’ fans in the  audience adored the crazy antics of James and Joe who charge through the canon with improvisation and ad libs to enliven the material and keep their audience in a state of uproarious delight. .The Canberra Theatre roof nearly took off when Joe introduced a live game of Quidditch, which coincidentally has taken off on playing fields in England. Half the audience are the Gryffindors and the other half the Slytherins. A large inflated ball is hurled into the audience and the games afoot as until James appears as a Ferrero Rocher golden Quidditch.. This is high octane audience participation with cheers that raise the roof as the Slytherins are proclaimed the visitors.. 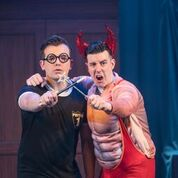 In about seventy non stop, frantically funny  minutes of belly laughing entertainment, James and Joe manage to travel through the seven books with an array of familiar characters from the three intrepid heroes to Hagrid, Dumbledore, the evil Lord Voldemort ,Severus  Snape, Sirius Black and the snide Draca Malfoy to name but a few of Rowlings’ eternally popular storybook creations from her vivid imagination.
After the laughter and through the madness and mayhem, Potted Potter, now a world wide sensation,  leaves its two actors exhausted and an audience thrilled to have lived the adventure and laugh with tears of love for their revered author and her magical world of wizardry and witchcraft.
Posted by Canberra Critics Circle at 10:57 AM