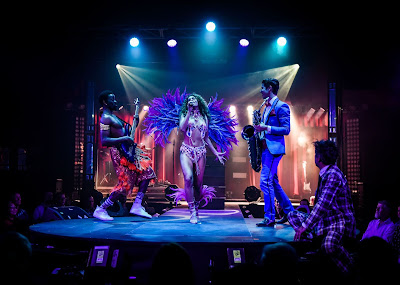 Created by Scott Maidment for Strut and Fret.
Choreographed by Hilton Denis and Rechelle Mansour


The arrival of spiegeltents in Australia has led to the creation of a whole new genre of variety entertainment combining music, circus, dance, song and comedy blended together by a theme.


The theme continues through the second half, which is much more celebratory, with the cast costumed in Mardi gras outfits performing a succession of eye-popping physical feats. Outstanding among them is an amazing 22 year-old, German born acrobat, Tim Kriegler with an astonishing aerial strap act performed to a mash-up of Bach’s “Toccata and Fugue”.  Equally impressive is a young NICA trained trapeze artist, Elke Uhd, whose brilliantly choreographed trapeze solo provides another highlight.


Although pre-recorded enhancements are utilised, most of the music is performed live by vocalists Rechelle Mansour and Lee Taylor, together with drummer, Attis Clopton and saxophonist, Blaise Garza, joined by members of the cast who between them utilise 20 different instruments for the excellent musical arrangements which support the acts. Garza also contributes his own crowd-pleasing act swinging out over the audience while playing some cool saxophone, while Hilton Denis and Rechelle Mansour dance up a storm with some nifty dance routines.


While “Life – The Show” doesn’t quite achieve the joie de vivre of its predecessor, “Blanc de Blanc”, it stills offers of diverting night of adult entertainment for the young at heart.