The Choir of Man

Put eight English and Irish lads in a pub (even a staged pub, but with real, flowing beer) and what do you expect to happen? Well, that too, but for the most part it’s songs and music, performed by the self-appointed pub choir.

Welcome to ‘The Jungle’, the pub where “The Choir of Man” takes the very simple premise of blokes gathering at the local to bond, pull chicks, celebrate, ruminate, urinate and…tap dance.

The songs performed throughout the show were drawn from a plethora of genres. The audience was allowed to marvel again at the musical complexities of Queen, enjoy a funny rendition of Adele’s “Hello” and Wham’s “Wake me up”. And speaking of up, the audience was up and down all night - certainly a result of allowing them on stage for an ale at the beginning of the evening and subsequently handing around beverages during the show. 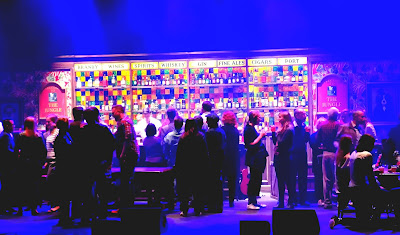 The audience mingles onstage, with beers from the pub set

It wasn’t just the audience members requiring relieving, as several numbers played out in a make-shift urinal – a clever set design, for a sequence that had the audience in stitches. Thankfully this didn’t include audience participation, which was enlisted to help build a house of cards, or be wooed, becoming the object of affection, for the duration of the song, at least. A pina colada, some ridiculous choreography, a trumpet and a mop for props kept participants and onlookers amused and entertained.

Possibly the most hilarious and frustrating sing-a-long yet, to The Proclaimers’ “I’m Gonna Be (500 miles)” kept the piano player’s “mates” and the audience on their toes. And a very good piano player he was too. Also impressive was the tap dancing, albeit occasionally performed for the most part by just one of the guys.

Some of the other instrumental accompaniments were less convincing than the piano playing. A significant part of the show was plagued with mic and sound issues – late entries and mics cutting out - definitely noticeable but not enough to ruin songs or stories altogether.

“Chandelier” was a harmonic highlight despite a couple of the highest notes sounding strained. The harmonies were beautiful and wide-ranging and the slowed-down, pared-back arrangement made for an impressive rendition. A poignant cover of The Kink’s “Waterloo Sunset” was very moving.

In a melancholic moment, and topical for today’s audiences, the narrator of the group bemoaned the shutting down of pubs and relationships, as iconic watering holes, live music and bonding is replaced by sterile, high rise apartment blocks and lonely living.

This choir of men tapped into the two things that will get any Aussie audience eating out of the palm of your hand – free beer and Johnny Farnham, then summed it all up with “Some Nights”, a song already primed for harmonies, with a thumping beat and rousing English band sound.

“The Choir of Man” was sweet, fun and unpretentious. It wasn’t perfect and it wasn’t meant to be. Love, loss and harmless shenanigans played out via song, stories and choreography.

As they said: “Some nights it’s five pints and forget, other nights it’s two teas and a talk.”

Posted by Canberra Critics Circle at 3:58 AM