MOTHER COURAGE AND HER CHILDREN 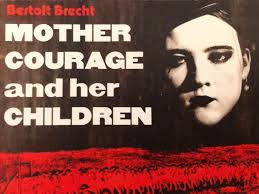 ‘Mother Courage And Her Children’ is an ambitious undertaking for any theatre company.  With the issues it raises about war and its effects, it’s a good choice for the Daramalan Theatre Company.

Set during the Thirty Years' War in the 17th Century, it focusses on Anna Fierling, nicknamed Mother Courage, a canteen woman with the Swedish Army, who is determined to make her living from the war.  Over the course of the play, she loses all three of her children to the very war from which she tried to profit.

Written by Bertolt Brecht in 1939 at the start of World War Two, its anti-war message is as strong as ever today.  The issues that must be explored and understood to be able to perform it with clarity and conviction make it an ideal choice for a student theatre company.

Joe Woodward’s production is staged very well with minimal settings in a large performing space.  The cabaret singer, Kara Blackburn, and her songs, mostly with music by Kurt Weill, set the right atmosphere before the show commences.

There are strong performances by the large ensemble cast, most of whom play multiple roles.  The director has obtained fine in-depth characterizations from all of the performers who don’t flinch from the confronting aspects of the play.

Jo Howard’s makeup and non-specific period costume designs add strongly to the atmosphere of the show, as do the incidental music and songs.

This is a challenging play for any company to perform.  It’s demanding for audiences and performers alike and the Daramalan Theatre Company have done well to present a full-blooded Brechtian production that is very satisfying.

Len Power’s reviews are also broadcast on the Artsound FM 92.7 ‘In the Foyer’ program on Mondays and Wednesdays at 3.30pm.
Posted by Canberra Critics Circle at 10:20 AM