Presented by the National Gallery of Australia at the John Fairfax Theatre. April 27th. 2019. 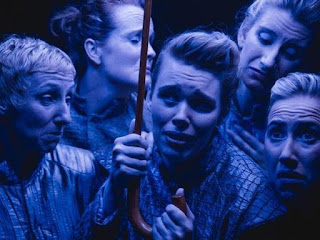 As one of its offerings to accompany its pre-Raphaelite Love and Desire Exhibition, the National Gallery of Australia’s Public Programs have presented Enter Ophelia, a compact, contemporary interpretation of Shakespeare’s Ophelia. Two professional theatre ensembles from Melbourne, Essential Theatre and Three Birds Theatre   have collaborated on a work, especially created to highlight Ophelia’s character in the dangerous, dark and uncertain court of Denmark.
Written by Candace Miles, Madelaine Nunn and Anna Rodway, the hour long performance bears the hallmarks of a collectively devised work, tightly written and precisely directed as a stylized representation of Shakespeare’s characters from Hamlet. The opening scene surprises with its contemporary caricature of society women at a cocktail party. It exudes artifice, clothed in privilege and preening posturing. In the midst of this Kardashianesque coterie of celebrity stands Ophelia (Amanda La Bonte) Shakespeare’s tragic heroine, more sinned against than sinning, poor victim of her male-dominated society. Spurned by her lover and controlled by her father, Polonius (Sophie Lampel standing on a chair) and her brother Laertes she struggles to assert identity.

Director John Kachoyan holds a tight rein on the various segments of the short performance, choreographing the piece from moments of frenetic dance to eerily robotic gesture to a chorus of women, sheltering under a luminescent umbrella to escape the storm that rages over Elsinore. Shakespeare’s text merges with colloquial speech and word association games that hurl Ophelia into a world of confusion and a watery grave in the most effective moment of the show where Shakespeare’s poetry and the tragedy of her death bring to mind Sir John Everett Millais’s centrepiece for the gallery’s remarkable exhibition of Love and Desire.
Enter Ophelia offers little insight into a deeper understanding of Shakespeare’s character. An all female cast in contrast to the all male cast of Shakespeare’s time directs our attention to the injustice of Ophelia’s treatment by male dominated society. However, Ophelia remains a victim, haunted and tormented by a court dominated by men.  Love and desire in this production slice sharply at the frailty of the human heart in a production that is carefully orchestrated, tightly scripted and stylized in its staging. The danger of a show that appears more driven by concept than narrative and contemporary experimentation than presentation of the original work is that is can appear elusive, especially if an audience is unfamiliar with the original source, Shakespeare’s tragedy Hamlet. In a production that moves so quickly and introduces snatches of dialogue from different Shakespearian plays as well as primarily from Hamlet, it is difficult to empathize with the central character, who, unlike Shakespeare’s character, has little opportunity to develop relationships and establish a distinct character.

There was no programme available before the show to provide an audience with an introductory insight into the approach that Essential Theatre and Three Birds Theatre were taking with this interpretation. This work would also have benefited from a Q and A session with the actors after the performance. It is a tightly directed and confidently performed professional show with clever moments and imaginative insight into one of Shakespeare’s more enigmatic female characters. I left the Fairfax Theatre of the National Gallery, feeling as though I had enjoyed well-presented art, but without the audio guide to make my experience completely satisfying.