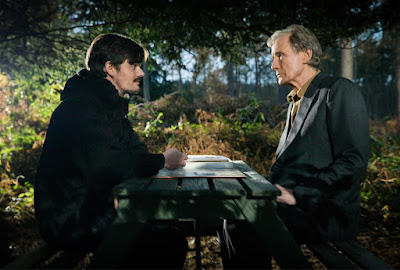 
Words, words, words are at the heart of the matter in this offbeat tale of a fastidious man, a retired tailor who has lost one of his sons. He is a fiend at Scrabble who can get a triple word score but he is at a loss with people he cares for.

In the striking opening scene, Alan (Bill Nighy), still as a statue, gazes out to sea. He is dressed in a suit, holding an umbrella, and as solitary as the other iron men statues at Crosby Beach near Liverpool that are scattered across the shore.

For many years, Alan has been searching for the elder son who stood up from a scrabble game one evening and left, over a word dispute, never to return. His other son, Peter (Sam Reilly, so great in Control), is the one who stayed behind in Liverpool, married, lived a steady life and now has a son of his own, teenager Jack (Louis Healy).

However, Alan is forever gazing into the blue yonder, on the lookout for the prodigal that got away, failing to appreciate what he has. This elision and under-appreciation has turned his son Peter a touch sour.

Things get going with a trip to the morgue, of all places, where there’s a body that might be the missing Michael, and just when that macabre movement of revelation seems about to occur, the film pulls back. Sometimes Always Never is like that, skidding across those hard and difficult surfaces while keeping the tone light, making the film an unexpected pleasure.

a family album of dysfunction and healing delivered with an oblique, jaunty eccentricity

When the body proves to belong to someone else, Peter and Alan continue their trip together to follow up more leads. At a hotel, the indefatigable Alan the chance to rip a bloke off at Scrabble and somehow, we don’t see how exactly, make a pass at the mans’ wife (Jenny Agutter). The interlude brings into the focus the gap between father and son.

The search is quickly abandoned and on their return home, Alan is politely offered a place to stay. In no time, Jack has turfed Jack out of his bunk bed and taken over his computer, the gateway to a world of Scrabble partners online. Peter is very put out but his wife Sue (Alice Lowe) doesn’t seem to mind that much and Alan, sartorial snob that he is, has a transformational impact on his grandson.

what’s with these adverbs of frequency?

Laced with observations on the English character and sensibility, Sometimes Always Never is a family album of dysfunction and healing delivered with that an oblique, jaunty eccentricity that only the British can manage without cloying sentimentality. An accomplished balancing act.

The film is a quest to find the prodigal becomes a quest to find what’s missing in the ones who are left behind. Based on a short story by Frank Cottrell-Boyce and illustrated with wonderful, imaginative production direction by Tim Dickel, it is superbly well directed by first-timer Carl Hunter.

So what’s with these adverbs of frequency in the title? Are they rules for life? It’s something along those lines, but the lesson takes an unexpected turn, which is one of the many gentle surprises and delights on offer here.

Jane's reviews are also published at her blog, the Film Critics Circle of Australia, and ArtSound FM 92.7
Posted by Canberra Critics Circle at 4:15 PM