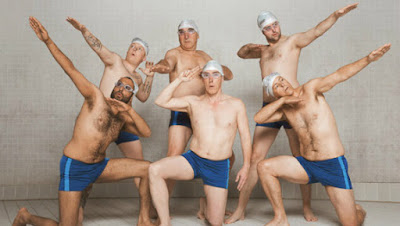 
Angst and how to lose it. Swimming with Men is pool immersion therapy that pokes fun at itself and encourages us to have a good laugh at its expense.

Synchronised swimming works wonders for a harried accountant, Eric (Rob Brydon of The Trip comedy series with Steve Coogan), who does laps at the local pool, but the silent blue world, counting tumble turns and following the black line up and down, doesn’t seem to soothe the work and relationship worries. These are mostly of Eric’s own making, but with little help from his busy wife Heather (Jane Horrocks) or his bemused teenage son, he is heading for a mid-life crisis.

There’s a group of men who meet at the pool for synchronised swimming. They have also hit the wall and recognise their symptoms in a glimpse of Eric at the pub, tossing back double G&Ts.  They offer a gentle invitation to join them for a little camaraderie with the exercise, no questions will be asked as their manifesto states that private and professional lives are kept a secret and it is all about a focus on the swimming.

There is basis in fact for this apparently daft idea. Swimming with Men, with deft direction from Oliver Parker and engaging screenplay from Aschlin Ditta, is a riff on a documentary from 2010 about a team of middle-aged Swedish men who eventually took their hobby to competition to find, just like the characters do here, that they were in competition with teams from countries like Japan, the Czech Republic and Italy. The idea has already caught on.

Although it doesn’t have the same energy and grist and grind as that fave feel good movie The Full Monty, Swimming with Men has the same heart for its motley crew of characters. Including the wayward young Tom (Thomas Thurgoose) who the cops are after.

And a couple of the men are simply there, ‘new guy’ and nameless, caught by the camera doing funny things in the background. Change rooms offer such possibilities.


There is basis in fact for this apparently daft idea

Synchronised swimming may look silly, but I discovered online that an it was an Australian, Annette Kellerman, who pioneered both water ballet, as it was once called, and the one-piece bathing suit, her design. Nothing silly there. It has been an accredited Olympic sport for decades.

However, this is not a review to give water ballet/synchronised/or artistic swimming a boost. This is to say that Swimming with Men is sweet silliness, even if it doesn’t always maintain the hilarity, and is most definitely feel good. If this is what’s needed during this dark month, then go see it.

Jane's reviews are also published at her blog, the Film Critics Circle of Australia, and broadcast on ArtSound FM 92.7