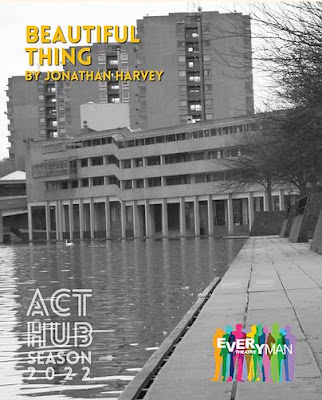 There’s something very likeable about ‘Beautiful Thing’ by Jonathan Harvey.  The play was written in 1993 when homosexuality was still a dirty word.

Jamie, a 15 year old, lives in a tough environment, the Thamesmead Estate in London.  His hard-working mother has a steady stream of lovers including the latest, Tony, and rules with a tough love.  He is bullied at school and his sexual awakening with his next door neighbour, Ste, as a gay person is just as much a surprise to him as it is to everyone else.  Coming out in that environment would be a troubling process.

Playwright, Jonathan Harvey’s love for his characters shines though as the story progresses.  Jamie’s story of sexual discovery is touching and told with delicacy.

Jarrod West has directed the play with great care, concentrating on the characters and ensuring a believable depth throughout.  The play has a nice energy throughout, too.

The set, with the audience surrounding the action, has been designed by Isaac Emily and uses the space wisely, giving the players a large acting area to work on.  Touches of colour keep the play from its bleak environment.

As Jamie, young Nick Dyball gives a heart-felt performance of great sensitivity.  It’s hard to believe that a person of his age could give such a knowing depth of performance, bringing out all of the sensitivity and self-doubt in the role.
Amy Kowalczuk gives a strong performance as Sandra, the mother, struggling though life herself.  She strikes the right note of aggression and insecurity right from the beginning and maintains it thoughout. In spite of the tough exterior, you can see the love under the surface.  It’s a very good multi-faceted performance.

Liam Pritchard as Ste brings out the self-doubt and hate for his own sexuality very well.  His tough bravado at the beginning of the play soon melts as we see the real person struggling underneath.  Pritchard shows every facet of this character in a quiet but careful interpretation.

As the next door neighbour and precious friend, Leah, Liv Boddington is sassy and tough, showing an affection for Jamie at the same time.  She gives a knowing performance of great understanding.

As Tony, the boyfriend, Colin Giles is colourful and charming in a well thought out performance.  It’s a credit to his skill as an actor that we hope he’s ‘the one’ for Sandra by the end of the play.

This is a tough, uncompromising play with an astonishing delicacy that suddenly moves you.  It’s the characters that get to you as the play progresses and this cast masterfully draws you in.

Posted by Canberra Critics Circle at 8:43 AM