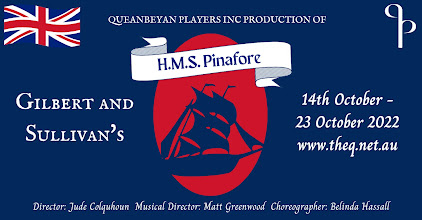 I can still recall when G and S ruled the Australian Musical stage. Across the nation in country institutes, school halls and city theatres Gilbert and Sullivan Musical Societies and school students delighted audiences with their exuberant productions of Princess Ida, Pirates of Penzance, The Mikado, Iolanthe, Ruddigore and HMS Pinafore. From the Fifties to the Seventies audiences would flock to see a G and S Favourite. As the audience clapped wildly at the close of the final performance of the Queanbeyan Players’ bright and bouncy production of HMS Pinafore, it was easy to see why. Jude Colquhoun’s  purposeful direction, Matt Greenwood’s rousing musical direction and  Belinda Hassall and Christina Phillip’s lively and effective choreography showed this amateur company in top form with excellent performances from the principals and enthusiastic support from the choruses.  From the moment the nautically clad male chorus in Janetta McRae’s Regency sailor suits launched into We Sail The Ocean Blue, it was obvious that this was going to be a rollicking romp. And Queanbeyan Players made sure that its final full house was not disappointed

Vintage G and S sets the scene for a satirical storm with gales of laughter, slapstick business and the silliest of storylines.  It’s all very simple really. Captain Corcoran (a whip-cracking Adam Best ) wants to marry off his daughter Josephine ( a sylph voiced Katrina Wiseman) to the First Lord of the Navy, Sir Joseph Porter KGB. Lowly tar (Ralph (Raif) Rackstraw (an appealingly gauche Andrew Finegan ) is passionately in love with the Captain’s daughter, but holds little hope of success because of his lowly station. Josephine too is enamoured of Ralph, but bound to obey her father like every good girl of her class. The thought of marriage to Lord of the Admiralty Sir Joseph (a dazzle-dazzle dimwit David Cannell) is more than a good girl can bear so plans are afoot to escape, only to be foiled by Dick Dead Eye  (snitching salty sailor  Paul Sweeney) It’s enough to throw true love overboard in a sudden swell. But love will triumph in true G and S style when sweet little Buttercup (Veronica Thwaites-Brown with the voice of nectar) reveals her hidden secret to the world and all discover what O joy and O rapture unforeseen it is to be born not a resident of Queanbeyan but a proper upright Englishman.

Gilbert and Sullivan are yesteryear’s The Wharf Revue, milking the sacred cows of establishment for all they’re worth. The class system, the woe-betide naval forces, politics and birthright all get a proper dunking from Queanbeyan Players in a production that owes its success to the conventional observances of Victorian music hall and satirical revue. Traditional updating is a matter of course and Cannell’s rendition of Sir Joseph’s signature song When I Was a Lad makes the most of contemporary jibes at the blundering French submarine deal, Covid, Tony Abbott’s knighthood fumble and Scott Morrison’s Hawaian jaunt while Bushfires burnt. Cannell makes the most of ridiculous Malapropisms (Captain Corona virus). Cannell’s Sir Joseph deserves a place in the Pantheon of Gilbert and Sullivan comic characters alongside The Mikado’s Lord High Executioner, The Pirates of Penzance’s Modern Major General and the Lord Chancellor’s Nightmare Song from Iolanthe. Cannell’s performance is dazzling, a triumph of comic timing,  a shining comet of comedic brilliance. A strong cast of principals, supported by a finely rehearsed ensemble chorus keep the production moving at a fast and hilarious pace with the occasional moment of loving tenderness to soften the mayhem (Ralph’s A Maiden Fair To See).

Queanbeyan Players have served up an entertaining revival of a Gilbert and Sullivan classic in the D’oyly Carte tradition. If nothing else, a cheering, clapping, foot tapping laughing full house on a wet Sunday afternoon proves that composer Sir Arthur Sullivan and librettist William Schwenck Gilbert still hold a place in people’s hearts if the production is true to that tradition of audience entertainment and participation and the art of lampoonery can prove the delight of any generation.

Queanbeyan Players’ production of HMS Pinafore has sailed into the sunset, proudly having ridden the waves on the high seas of popular entertainment.

Posted by Canberra Critics Circle at 11:59 AM