THE COMEDY OF ERRORS - Bell Shakespeare 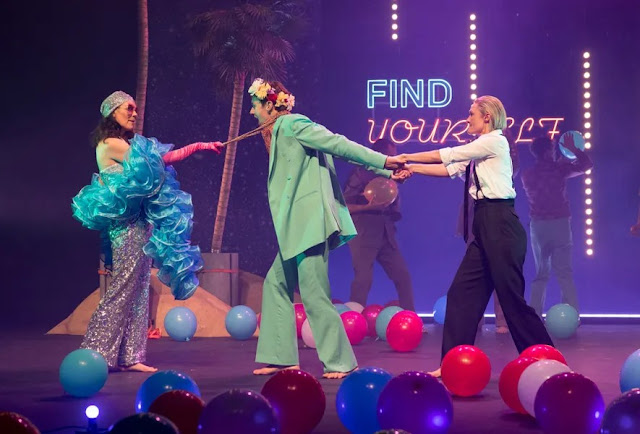 With its increasingly bizarre productions and enthusiastic embrace of gender-blind casting, it’s hard to escape the impression the Bell Shakespeare has lost confidence in the ability of Shakespeare’s  plays to interest modern audiences if presented as written.

Janine’s Watson’s delightfully entertaining production of “The Comedy of Errors” is a good illustration of this.  One of Shakespeare’s earliest and least complicated plays it relies for its humour on the complications caused by mistaken identities when two sets of identical twins, one set both called Antipholus, and the other both called Dromio, find themselves in the same place at the same time

For her production Watson has added her own complications by updating the action into the 1970’s, although the actors still speak in Shakespearean language, casting some of the roles written for male actors with female actors, including the role of the Duke (surely now, Duchess) double casting some of the roles, including one role usually played by a woman but in this production, played by a man.

She then has her actors play the roles in an exaggerated clownish style with lots of prat-falls and double-takes. Great fun for the actors and the audience, but almost impossible for the audience to relate to the actors as actual characters, rather than caricatures, so that by the end of the play, when the actors perform the reconciliation scenes realistically for pathos, it’s difficult to care for them one way or the other; especially if you’re still puzzling as to why anyone had trouble confusing the two Antipholus’ when one was sporting a moustache and the other was clean-shaven.

It should be noted that the production looks rather marvellous with Hugh ‘Connor taking full advantage of the opportunities offered by 1970’s update, to fill the stage with balloons, fairy-lights and disco balls and clothe the cast in colourful seventies costumes in which to inhabit his disco settings.

Watson’s inventive production is awash with good ideas, enhanced by the stylish moves devised by movement director Samantha Chester and interpreted with enthusiasm by the cast. It's clever and entertaining, but at the end  one wonders what has been gained by the gender-blind casting, up-dating, balloons and razzle dazzle.

For those in the audience not particularly interested in exploring nuances achieved by having women in roles written to be played by men, or for that matter, men in roles written for women, there arises the question as to whether this play would have been just as entertaining if presented as Shakespeare wrote it?  If so, why wouldn’t Bell Shakespeare present it that way ?  If not, what was the point in presenting the play at all?