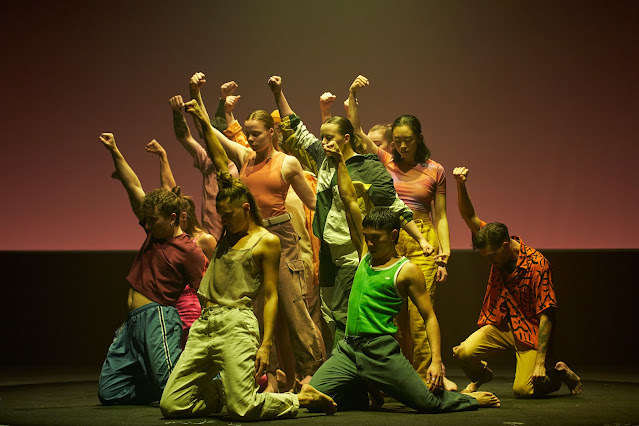 Conceived, Choreographed and Directed by Daniel Riley for Australian Dance Theatre.
Canberra Theatre 29th and 30th September, 2022.
Reviewed by Bill Stephens
This new work by Daniel Riley has attracted considerable interest in Canberra dance circles.
Riley started his dance career with Quantum Leap, now QL2 Dance, before forging a significant career as a dancer and choreographer with Bangarra Dance. Riley returns regularly to Canberra to hone his choreographic skills creating works on QL2 Dance.
As his first major work for Australian Dance Theatre in Adelaide, a company created in 1965 by his long-time mentor, Elizabeth Cameron Dalman, and for which he is now Artistic Director, “Savage” is an important indicator of the direction in which he will take this company.
Riley has an agenda. As an indigenous choreographer, He feels compelled to use his current position to address issues concerning First Nations people and in a recent interview he is quoted as saying “I am the first First Nations person to be a mainstream director of a dance company, so I have the platform to ask those questions and I feel enabled by it”.
In his program notes for “Savage” Riley says “I was interested in exploring the clash between power and identity, and exposing how our hearts and minds have been captured in the battle of the Australian imagination. Heroes and foes on the wrong side of history; details of events often remembered to suit the victors...I want this work to encourage deeper thinking and reflection on the systems and voices who coerce our history to suit a singular vision of our country”.
How these ambitions are realised in this contemporary dance work is both fascinating and confronting.
Designer Dean Cross has created an imposing setting consisting primarily of two huge fence-like structures which can be moved around the stage during the performance by the dancers. When the audience enter the theatre these structures a covered by a drab plastic drape. 25 fluorescent lights bathe the stage in a harsh white light. On the floor in front of the stage is arranged a row of stark white plastic chairs.
To the persistent throb of James Howard’s soundscape, a young woman takes the stage. She strolls then sits, deep in contemplation. As the houselights dim, the audience is bathed in hot orange light, which eventually fade to black-out, setting the mood for what is to follow.
As the stage-lights come up more white chairs are revealed, and these chairs become a constant as the work progresses. They’re thrown angrily around the stage, moved in rows by the fences, stacked around the dancers to confine them.
Riley has gathered six interesting dancer who form the core of ADT, Sebastian Geilings, Brianna Kell, Zachary Lopez, Jada Narkle, Darci O’Rourke and Joe Wazniak. For the Canberra performances these dancers were joined by eight dancers from QL2; Arshiya Abhishree, Penny Moore, Akira Byrne, Mia Canton, Jahna Lugnan, Magnus Meagher, Danny Riley, Cassidy Thomson, and Julia Villaflor. Riley himself also performed. 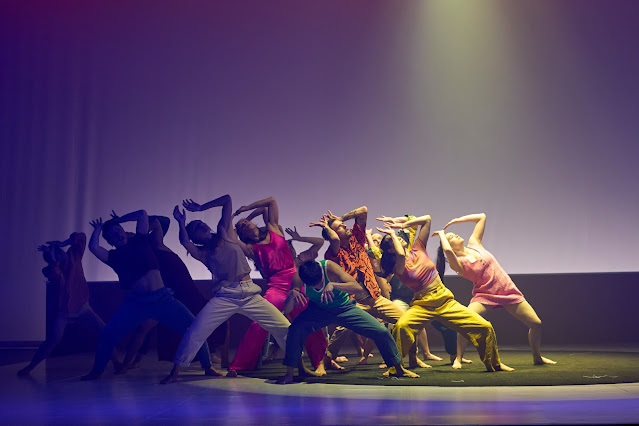 The work has an epic quality greatly enhanced by Matthew Adey’s striking lighting design and the grating soundscape created by Jason Howard. Ingenious use of the huge fence-like structures to create corridors and barriers, and the constant re-arrangement of the white chairs created an endless flow of striking stage pictures.
Riley’s choreography is inventive and beautifully performed by his dancers costumed by Cross in individual urban-punk costumes. However much of the symbolism was difficult to grasp, particularly the inclusion of three white yeti-like figures.
While interesting to watch, given the ambitions expressed, much of the enjoyment of the work was diluted by trying to work out what the various episodes represented. However, given that one of the ambitions for the work was to encourage deeper thinking, it certainly worked on that level for this viewer.
Images by Sam Roberts
This review first published in CANBERRA CITY NEWS on 30.09.22
Posted by Canberra Critics Circle at 11:20 PM