THE WHARF REVUE: LOOKING FOR ALBANESE 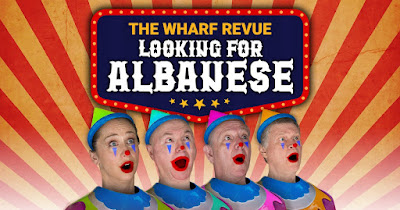 It’s time again for the annual Wharf Revue and what a beauty it is!  The same team of Jonathan Biggins, Mandy Bishop, Drew Forsythe and Phillip Scott is back and there was plenty going on in the world this year to take a shot at.  It’s slickly done right from the start until the close 90 minutes later.

From the opening number with the cast as those clowns with their mouths open at an amusement park, singing to ‘Happy Days’, one good sketch after another tumbles out at breath-taking speed.

The parade of significant people here and around the world is done very well.  There isn’t space here to name everybody skewered and part of the fun of ‘The Wharf Revue’ is the surprise factor anyway.


Without giving too much away, the highlights were ‘The Greens’, suspiciously reminiscent of ‘The Wiggles’, ‘Albo In Wonderland’, ‘Oh What a Culture’ with tunes from ‘Oh What A Lovely War’ and sharp sketches on Anthony Albanese, Jim Chalmers, Boris Johnson, Peta Credlin and King Charles III.

Many of the old favourites keep making news, unfortunately, and the Wharf Revue is merciless about them.  Drew Forsyth is hysterical as Pauline Hanson, Mandy Bishop is superb as Jacqui Lambe, Phillip Scott is a brilliant Kevin Rudd and Jonathan Biggins brings out his Paul Keating again to devastating effect.  So many people are on offer, it’s all a bit of a blur afterwards.


Production design is minimal but it’s been thought out very well.  The focus is on the people being satirised.  Lighting Designs by Matt Cox, costumes designed by Hazel and Scott Fisher, music by Phillip Scott and video design by Todd Abbott are all excellent. The endless succession of costumes and wigs in this show is extraordinary as are the endless whirl of quick changes.  It must be frantic backstage.

‘The Wharf Revue’ has become an annual institution.  Maybe someone should be satirising them, too?

Posted by Canberra Critics Circle at 8:18 AM